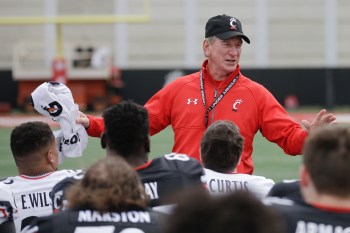 Speaking Monday at a meeting of the Northeast Ohio Interscholastic Athletic Administrators Association, NCAA executive Oliver Luck said that he expects the rule banning satellite camps to be revisited, according to ProFootballTalk.

Luck is the NCAA executive vice president of regulatory affairs.

Oliver Luck at a speaking engagement in NE Ohio this morning said he expects the satellite camp rule to be revisited.

The rule change, which bans schools from holding camps and clinics off campus, was subject to much criticism when it was announced 10 days ago. The new measure requires Football Bowl Subdivision schools “to conduct camps and clinics at their school’s facilities or at facilities regularly used for practice or competition.”

The Southeastern Conference, which already banned the camps, was pushing to apply its rule nationally.

The council’s vote from April 8 still needs to be certified by the NCAA Board of Governors at its April 28 meeting. The board primarily is comprised of school presidents and chancellors, while the council is mostly athletic administrators.

Michigan has been in the middle of the controversy because coach Jim Harbaugh put together a weeklong, seven-state camp tour last summer and was planning something similar this year.

Both U-M athletic director Warde Manuel and Harbaugh have said that they are working on a response to the ban but wouldn’t say how soon nor share details.

Luck and Harbaugh have a history because Luck’s son Andrew played for Harbaugh at Stanford.

Cincinnati coach Tommy Tuberville, for one, told ESPN Radio’s Freddy Coleman that he expected the rule to be overturned.

“I just can’t imagine, of all the rules in my 35 years of coaching college football, that this was even voted on because it just doesn’t make any sense for the players,” Tuberville said to Coleman Tuesday, according to mlive.com. “This is not going to stay. This can’t happen. Surely we’ve got more sense than this.”

Central to the argument of those in favor of satellite camps is the value it has for under-recruited players who are looking to catch the eye of a college coach.

“All I hear is it’s about the student-athlete, well by golly it ought to be about the student-athlete, it ought to be about them having the opportunity to be evaluated and the parents not have to drive to 10 or 15 different universities in a two-year period to try to get their son evaluated,”said  Tuberville, the former president of the American Football Coaches Association. “So, I just do not think that the NCAA is going to hold this up. I think it will be voted back in and I think it will be business as usual.”

https://usatodayhss.com/2016/ncaa-exec-satellite-camp-ban-revisited-tommy-tuberville-oliver-luck
NCAA executive expects satellite camp ban to be revisited
I found this story on USA TODAY High School Sports and wanted to share it with you: %link% For more high school stories, stats and videos, visit http://usatodayhss.com.