No. 1 New Albany got 28 points from star sophomore Romeo Langford as the Bulldogs won the Class 4A state title on Saturday at Bankers Life Fieldhouse. (Clark Wade / IndyStar) 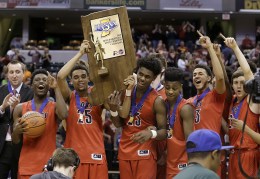 New Albany Bulldogs Romeo Langford (1) is almost triple-teamed but still drives to the backer in the second half of the IHSAA 4A Boys Basketball State Final game Saturday, Mar 26, 2016, evening at Bankers Life Fieldhouse. The New Albany Bulldogs defeated the McCutcheon Mavericks 62-59.

INDIANAPOLIS – The Romeo Show is now complete with a state championship. At least one.

Top-ranked New Albany defeated No. 4 McCutcheon 62-59 Saturday night for the Class 4A championship at Bankers Life Fieldhouse, claiming the program’s second state title and first since 1973.

Romeo Langford, New Albany’s sensational sophomore, was held below his 30.3-point average as he finished with 28. McCutcheon’s zone defense made it difficult for the 6-4 Langford to get on track, at least as easily as he did in last week’s 46-point explosion against Southport in the semistate. But he took over when he needed to for the Bulldogs (27-1).

“We wanted to hold him under his average,” McCutcheon coach Rick Peckinpaugh said. “I guess we did. But still in the second half, I thought he took over. We had a hard time stopping him.”

Indiana’s Tom Crean, Butler’s Chris Holtmann, Purdue’s Matt Painter and Kentucky’s John Calipari were among the coaches on hand to see Langford, considered one of the country’s top players in the 2018 class. He scored 12 points in the fourth quarter, including a 10-foot floater in the lane to push New Albany’s lead to 54-51 with 2:41 left.

After McCutcheon’s Eddy Collins cut New Albany’s lead back to one with a layup, Langford made two clutch free throws with 49.5 seconds left to make it 56-53. He put the capper on it with a reverse dunk with 17 seconds left.

McCutcheon (28-4) had a final chance, down three with 2.6 seconds left. But Billy Loft’s pass went out of bounds and New Albany was able to run out the clock.

“This was our first time playing in front of this many people and we put on a show for them,” Langford said of the crowd of 16,202 for the night session. “(McCutcheon) spaced us out of the offensive end and found shooters. On the defensive end, they had a matchup zone that we weren’t ready for that much, but did better in the second half.”

Langford had plenty of help from junior Isaac Hibbard, who finished with 17 points and made 4-of-8 from the 3-point line. McCutcheon’s zone was designed to keep New Albany’s penetration to a minimum. But Hibbard found a comfortable spot in the corner and kept firing.

“I wasn’t making mine, but Isaac always has my back,” Langford said.

McCutcheon, also led by a sophomore in point guard Robert Phinisee, led by as many as nine points in the first half and were up 33-28 at halftime. Phinisee, who has offers from Indiana and Purdue, fouled out in the final two minutes and finished with 13 points, six rebounds and six assists.

New Albany made a push right away in the second half on a Langford dunk and a 3-pointer from Sean East. Hibbard knocked down back-to-back 3-pointers as the Bulldogs led by as many as six.

McCutcheon again battled back, taking a 45-43 lead late in the third. But another 3-pointer from East put New Albany ahead to stay.

It’s a long road to Bankers Life Fieldhouse. And it resets each year at the start of March. But what unfolded on Saturday night at the fieldhouse could be just the beginning of a dynasty.

“We had so much time this week that I started to fantasize about what my speech would be if we won,” said Jim Shannon, in his 18th year as New Albany coach. “And now I don’t remember what I was going to say. It’s so surreal.”

https://usatodayhss.com/2016/new-albany-wins-first-state-title-since-1973
New Albany wins first state title since 1973
I found this story on USA TODAY High School Sports and wanted to share it with you: %link% For more high school stories, stats and videos, visit http://usatodayhss.com.