Senior Nick Zanchi scored a hat trick for the Titans (24-1-1), the No. 2 team in the state coaches’ association poll, and freshman Cal LeDoux added the other two for Collegiate, which won its 23rd straight game.

With the win, Collegiate earned their first appearance in a state tournament quarterfinal since the 2011 season, which then was the second straight season the Titans advanced that far. The 24 victories this season also rank ninth all-time, according to KHSAA records, matching the total Covington Catholic reached in winning last year’s state title.

Entering Tuesday, Collegiate scored a state-best 157 goals this season and were led by Haji Abdikadir (40 goals), Mirza Ugarak (32 goals) and Cameron Wheeler (19 goals), but it was the Titans’ fourth and fifth options that did all the damage against the No. 25 Bears (19-5-1).

“We’re very well rounded,” Titans coach Chad Wozniak said. “I know some of those guys get a lot of the accolades, but if you look at our game sheets… we’ve got a lot of weapons.”

LeDoux and Zanchi teamed to put the Titans on the board with 15:18 left in the first half. LeDoux was open on the left-hand side and as he drew near the goal, the defense overshifted toward him. That allowed the freshman forward to send a cross to a wide open Zanchi who buried the opportunity for the lead.

Just a couple minutes before Zanchi’s first, Butler had its best chance of the game. Sophomore Irakoze Chartier dribbled around a couple Titan defenders to create space as he moved to the middle of the field. He unleashed a shot from just outside the penalty box that Titans keeper Evan Konermann leapt to push off the crossbar and keep the Bears off the board.

In the second half, as Butler sought opportunities to get an equalizer, it allowed Collegiate to set up the counterattack. A Zanchi header off a Wheeler corner kick 10 minutes into the second half made it 2-0 and essentially put the game away.

“I just went into the game hungry and wanted to score goals,” said Zanchi, who now has 18 goals on the season. “Luckily, I was able to do that.”

The Bears set a team record for wins while earning their first regional title in 15 years thanks to starting lineup that included seven freshman and sophomores. Coach Mario Carrillo has other underclassmen in the wings to step into new roles as well. With that combination of youth and success, Carrillo said he expects his team to be competitive for years to come.

“That’s the hardest thing with young kids like this,” he said. “To make them understand that as a region favorite now coming into next season, we’re always going to have to bring our ‘A’ game every single game.”

For the Titans, their road to their first-ever state title gets no easier. Awaiting them Saturday in Lexington is No. 11 Covington Catholic, which defeated No. 7 Mercer County, 3-0 on Tuesday.

“We have that one goal in mind,” Wozniak said. “We’ve had it all year long. We had the ‘All-A’ as a goal and we have the state title as a goal, and they believe they can do it. We just got to stay focused.” 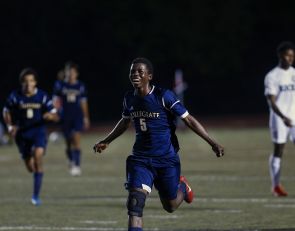 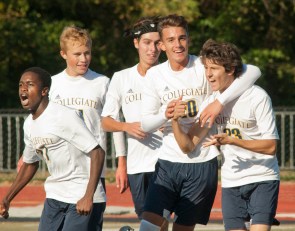 Defending state champ Covington Catholic up next for Collegiate 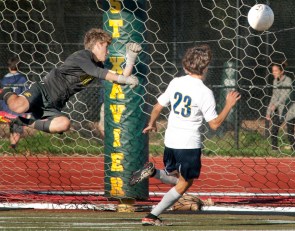 https://usatodayhss.com/2016/nick-zanchi-scores-hat-trick-as-collegiate-takes-down-butler
Nick Zanchi scores hat trick as Collegiate takes down Butler
I found this story on USA TODAY High School Sports and wanted to share it with you: %link% For more high school stories, stats and videos, visit http://usatodayhss.com.