No. 3 DeSoto finally has its Texas state championship

No. 3 DeSoto finally has its Texas state championship

TCU quarterback commit Shawn Robinson, the team’s star all season after transferring in the summer from Denton Guyer, threw for 220 yards and two touchdowns and ran for 190 and a TD. DeSoto got a scare when an injured Robinson left the game with less than 10 minutes remaining, but he returned on the next series.

The victory capped a 16-0 season for DeSoto after a 6-6 year in Todd Peterman’s first season as head coach.

“I’m thankful the administration gave me another shot, first of all,” Peterman said. “Allen beat us (last year). We weren’t off the next week. These kids were all playing seven-on- seven on their own the next day. You knew right then, we got something special. We knew we were young last year and we were going to have sixty something kids come back. At a point, these guys took over. Their going to refuse to lose and they’ve done it multiple times this year.”

Though the Eagles never trailed against Steele (14-2), their penchant for closes games continued — the team had trailed in the last three playoff games. Steele cut the margin to 35-29 on a 20-yard run by Texas Tech quarterback commit Xavier Martin.

“At halftime, I told the kids, we played Steele before. We were up same way and they came back and did the same thing that happened tonight and made a heck of a game out of it. Our kids and our staff have the upmost respect for coach Lehnhoff and their group.”

After forcing a DeSoto punt, Steele had possession in its own territory with eight minutes remaining in the game. But Isaiah Stewart forced a fumble, DeSoto took over and then added a field goal to set the final margin with 2:06 left.

All season long, it seemed like everything was leading to this for DeSoto. The pummeling of talented teams. The two wins against rival Cedar Hill. The escape from a small but determined Abilene team. The defensive touchdowns to lift them over Klein Collins.

Despite some close calls, these Eagles aren’t just lucky. They’re a talented, disciplined, unified team that’s easily one of the best to come out of DFW in a while. They were the best team in this division, and possibly in this classification, all year long. 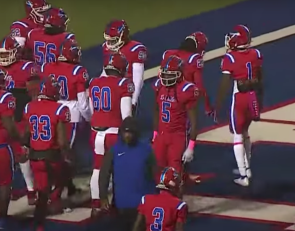 https://usatodayhss.com/2016/no-3-desoto-finally-has-its-texas-state-championship
No. 3 DeSoto finally has its Texas state championship
I found this story on USA TODAY High School Sports and wanted to share it with you: %link% For more high school stories, stats and videos, visit http://usatodayhss.com.