Pace players and fans celebrate after a 35-34 overtime victory Friday at Milton.

You can add the latest to one of the best in the series’ history.

After the Patriots rallied from a two-touchdown deficit in the second half and withstood a final Milton chance in regulation time, they won 35-34 in the first overtime by thwarting Milton’s fake attempt on the extra point of its touchdown.

“I think this is the 25th year I have coached in this game, and I don’t think I have ever been in one like this one that ended that way in overtime,” said Pace coach Kent Smith, in his first year as head coach after previous time spent as an assistant coach under legendary Mickey Lindsey.

“That was a gutsy call by (Milton) coach (Chafan) Marsh, and I would have done the same thing in that situation. I think they felt they could not stop our running game, their defense was tired and so why not try to win right there.”

And that’s exactly what Marsh wanted to do. After Panthers receiver Dominic Burke made a terrific diving catch in the corner of the end zone to answer Pace’s touchdown in overtime, the Panthers lined up for the extra point. But instead of kicking, Will Murta got the snap, but Pace defenders were onto the fake and snuffed out the pass attempt.

“The momentum was killing us,” Marsh said. “We had not been able to stop them (at end) and now we’ve got to go for two, I thought, to win the game. It was a play we had worked on, but they just blocked it.

“It’s a gut-wrenching game. With this rivalry it never matters what the records are on each team. This is the best rivalry and it showed again (Friday).”

It showed itself in several ways. Even the end of the first half was wild.

With the game tied 14-14, the two teams exchanged a combined three turnovers in the last 45 seconds. The takeaways came a total of 11 seconds apart.

Pace was going in for a go-ahead score inside the Milton 20 when Anthony Johnson lost the ball. But on the next play, Pace forced a fumble that John Williams recovered at the 14. On the ensuing play, the Panthers’ Martavious Odom, who had recovered the fumble, snared an interception at the 1, so the half ended at 14-all.

The streak is over: Gulf Breeze stuns Navarre

On the first play of the third quarter, Dehmadric Slack went 67 yards for the go-ahead score. Milton then extended the lead to 28-14 when Lonnie Bennett hauled in a 19-yard touchdown from Aubrey Williams with 2:35 left in the quarter.

But the fourth quarter was all Pace.

Quarterback Damean Bivins finished a long dive with a 3-yard run. The Patriots defense then forced a quick three plays from Milton. Getting the ball at its 30, the Patriots used Johnson left and right on sweeps to get in position.

Smith then called a gutsy play, a fourth-down trick pass from the 19 from receiver Cameron Rohling that Nate Ramirez caught in traffic and with another receiver, Cameron Bozeman, right next to him.

“We call that play, A Shot,” said Smith, appropriately. “We do it every day and I just thought we needed to do something right there. This is such a big win for us. We have kinda been behind all year and the kids kept on battling. We have so many guys injured, and it’s a long season, so this is special.”

Milton had a chance on its final series of regulation after Marquise McRoy returned an interception to the Pace 44 with 2:54 left. But the Panthers could not get closer than the 28, which forced a 45-field goal that Murta had the distance, but went left as time expired.

In the first play of overtime, Pace’s Johnson scored from the 10 and the extra point was good, which set up the ending. 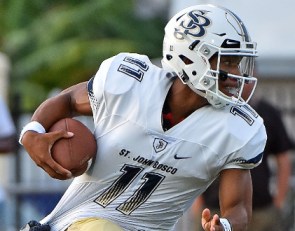 Five things to watch this week in Super 25 football 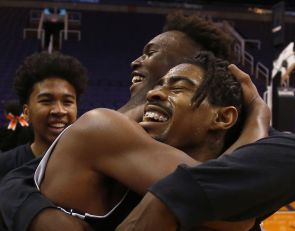 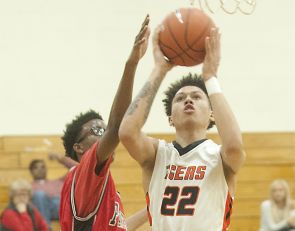 https://usatodayhss.com/2016/pace-thwarts-fake-extra-point-to-beat-milton-in-ot
Pace thwarts fake extra point to beat Milton in OT
I found this story on USA TODAY High School Sports and wanted to share it with you: %link% For more high school stories, stats and videos, visit http://usatodayhss.com.