Long before parents began enlisting private coaches to develop their rising basketball or lacrosse prospects, the next generation of high school and college golf standouts were fixtures on the lesson tee with PGA professionals.

It’s been the accepted practice for nearly 100 years.

The idea of learning from experts has deep roots behind the gates of private clubs, so credit the privileged few with starting this trend of young players seeking professional coaching and training.

PAY TO PLAY: The high cost of youth sports
THE PATH: Experts explain the path to high school varsity squads
OUR REPORT: How the reporters got the story
COSTS: Money and time add up in youth sports
PAY TO PLAY: The findings
JOE GIRARDI: Yankees’ manager not a fan of specialization by young athletes

A large majority of the players who compete for high school golf teams in the Lower Hudson Valley learned the game at private clubs.

“It’s a huge advantage,” Fenway Golf Club head professional and Metropolitan PGA President Heath Wassem said. “Drastically so. We’ve actually helped a few kids on the Scarsdale team who didn’t have access because the kids that do enjoy the spoils of riches are so far ahead of the game.”

Tennis wasn’t far behind golf in adopting this development model. Hockey and soccer were the first team sports to explore club setups.

There is no way to compete with that kid who gets on a private jet each weekend to get lessons in Georgia.

A top junior player is usually lugging a lightweight bag filled with the latest clubs. That’s a $3,000 investment before any modifications are made. Playing half a dozen American Junior Golf Association events isn’t unusual. Expect to spend another $8,000 on travel, depending on distance and entry fees.

Weekly lessons with a local PGA professional are critical. Budget at least $125 an hour. It snows in the winter here so the off season is a good time for strength and conditioning. Plan on spending another $2,000 per year for weekly personal training.

These kids all grind, hoping to play for a major Division I school.

“For me, if it’s light out and I’m not practicing, I feel like I’m giving something away,” said Cameron Young, a sophomore at Wake Forest who grew up with access to the world-class facilities at Sleepy Hollow Country Club where his father is the head professional. “I think you have to realize there’s a point where you’ve gotten everything done and it’s OK to leave it there. The balance is important, but that’s hard for me sometimes.”

They need a place to play and practice. A round at Spook Rock is $20 for Ramapo town residents under the age of 18. Yearly dues for a private club in Westchester County average $12,181 and initiation fees average $50,195, according to an annual survey conducted by the Condon, O’Meara, McGinty & Donnelly accounting firm.

Of course, there is a built-in advantage to growing up in the Lower Hudson Valley. There are nearly 70 public and private courses in Westchester, Rockland and Putnam counties, including several that rank in the top 100.

EXPENSES: Cost of youth sports creates bigger divide
PLAYING THROUGH PAIN: Does youth sports specialization lead to more injuries?
ELITE PLAYERS: The top high school athletes are in a different class
​YOUTH SPORTS: A good fit is crucial on a travel team
DRIVING THE COSTS: Are parents of young athletes behind the frenzy?
YOUTH SPORTS: The best quotes from the Pay to Play project

The recession hit golf hard, so did a changing lifestyle that emphasizes more family time. It’s been a slow recovery, but there have been positive signs in recent years. To revive golf, the industry has introduced a number of initiatives specifically targeting junior golfers.

And they aren’t looking to sign up stars. The next generation of recreational and competitive players is just as important.

Speaking of stars. One of the game’s greatest, who was a standout on the PGA tour at one time, advocates for equality in the sport.

“We have to get leaders to think and come up with better programs,” said Gary Player, who has won nine major championships and still travels extensively promoting the benefits of physical fitness.


No shortage of ideas.


All of golf’s governing bodies are involved in efforts to level the playing field. They have produced  national programs like Drive, Chip and Putt, PGA Junior League and First Tee. All of the initiatives have improved access.

Most agree that more has to be done on a local level.

World Golf Hall of Famer Gary Player believes incentivizing junior golfers by subsidizing their greens fees will get more players on the local courses. The 81-year-old was at GlenArbor Golf Club in Bedford earlier this month for a charitable outing that raised $100,000 for his foundation.

That is essentially the model of Youth on Course, a charitable program started a decade ago by the Northern California Golf Association that subsidizes greens fees so junior golfers can play for $5 or less.

“First, you have to get kids up to speed and get them playing well enough to get around in a good amount of time,” said PGA pro Tom Watson, a winner of eight major championships who advocates for the program. “Second, we have public courses with open tee times that can be filled with kids. If these operators would let the kids on for a reduced fee or give the parents a break, they would fill those times. That brings in revenue and the courses have to look at it that way.”

In an era when 70 percent of kids quit playing organized sports by the age of 13, similar initiatives might be the key to keeping them involved.

The bottom line is key.

A large percentage of the game’s recent growth is among junior players. According to the National Golf Foundation, some 500,000 kids between the ages of 6-17 picked up the game last year. Not long ago, the national associations only promoted in-house initiatives. Now the USGA, PGA of America, LPGA and PGA Tour are combining resources and pulling in the same direction.

“What’s so encouraging is these programs are working with the golf industry,” PGA of America CEO and Bedford native Peter Bevaqua said this past spring. “The major entities in the game are aligned in the mindset that we need to bring kids into the game in a fun, welcoming, accessible way.”

Christian Cavaliere of Somers played in multiple NYSPHSAA championships and won the 99th Met Junior Championship this summer. He is now playing at Boston College. 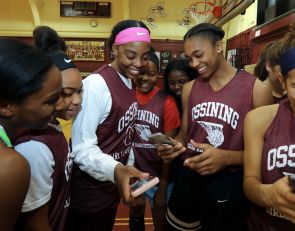 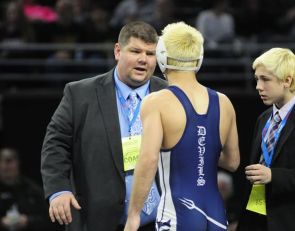