Providence boys basketball has a need for speed, and while Austin slowed the pace early, the Pioneers ran away with a convincing win nonetheless Friday night.

Three players scored in double figures as Providence turned in a 53-32 victory over the visiting Eagles. Austin’s zone left the Pioneers scratching their heads midway through the first period, but once Providence settled in, it was smooth sailing.

The Pioneers led 11-6 after one and 24-15 at the break but used an 11-3 third-quarter edge to create a sizeable cushion entering the fourth quarter. Providence went 9-of-16 from 2-point range and forced 10 of the Eagles’ 15 turnovers after halftime.

“Against zones,” Providence coach Andrew Grantz said, “our guys just need to get a little bit more of a mentality to get the ball into the paint to score it – not to get into the paint to kick out for jump shots. I thought halfway through the third quarter, our mindset changed to get into the paint, and it led to more offensive rebounds for us. And we actually were able to turn them over a little bit more and speed the game up because we weren’t settling for jump shots.”

Juston Betz led the Pioneers with a double-double – 10 points and 11 rebounds to go along with a team-high 4 assists and 5 steals. Eli Coker tallied a game-high 11 points – and added three steals and two blocks – while Landon Sprigler chipped in 10. Coker scored 9 of his 11 points in the second half, spearheading the Pioneers’ up-and-down attack, per Betz.

“It was more of a mindset than anything,” Betz said. “We were kind of passive at the beginning of the game, wishing things in. But as the game went on, Eli got us going, I think. He started attacking the rim. … If we’re aggressive, and our mindset stays that way, we’re going to be able to beat zones.”

Providence adjusted to the slow tempo early after falling in a 0-4 hole. Sprigler capped a long possession with a floater for the Pioneers’ first points before Betz notched a putback to knot the score a 4-4 midway through the quarter.

Alex Judd then took a charge on the other end, igniting a 4-0 run from the big man to give Providence a lead with a minute left in the quarter. A buzzer-beating 3-pointer from Betz to end the period shifted the momentum that much more.

“The things like that that (Judd does),” Grantz said, “are just as important as someone scoring 25 for us – if not more important, because it really changes the momentum of the game.”

The Pioneers began the second quarter 0-of-3 from the floor but orchestrated a 7-2 run nonetheless. An offensive rebound and putback by Judd gave Providence a nine-point lead, and Coker’s first points and an assist to Sean Morris made the 24-15 halftime score.

Providence’s defense propelled the host Pioneers to a commanding third-quarter performance. A basket by Trevor McIntosh opened second-half scoring for Austin, but it proved to be the only Eagles field goal of the quarter. Austin shot 1-for-8 and committed six turnovers in the third. Providence led 35-18.

Coker scored five straight for the Pioneers to begin the fourth quarter, and Betz’ driving layup with 3:27 left gave the senior a double-double and Providence a 45-24 advantage. Betz credits his big men for opening up alleys for rebounds at the guard position.

“Alex and Dawson (Mitchell) do a great job of keeping their bigs off the boards,” Betz said. “So it’s the guards’ job – Eli, Landon, Sam (Conrad), my job – to crash the boards hard. … So the credit goes to them.”

Providence turns around to host Madison Saturday and Meade County (Ky.) on Tuesday. The Pioneers then kick off a three-game stint on the road next Saturday at Scottsburg.

“We have a lot of tough games coming up,” Grantz said, “but the biggest game on our schedule right now is Madison. After that, we’ll worry about the next one.”

The Eagles next welcome Trinity Lutheran on Tuesday before their matchup at Henryville next Friday. Austin’s meeting with the Hornets begins a four-game stretch away from home. 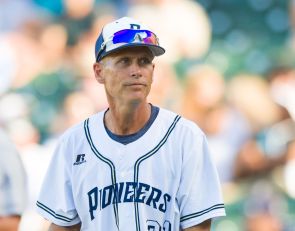 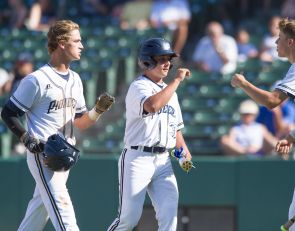 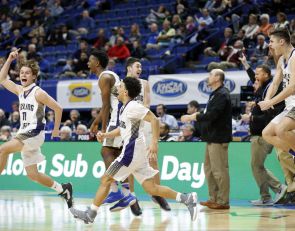 https://usatodayhss.com/2016/providence-controls-tempo-cruises-to-rout-of-visiting-austin
Providence controls tempo, cruises to rout of visiting Austin
I found this story on USA TODAY High School Sports and wanted to share it with you: %link% For more high school stories, stats and videos, visit http://usatodayhss.com.