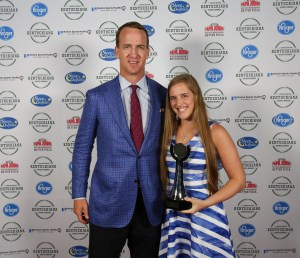 Peyton Manning with Marissa Hornung during the Kentuckiana Sports Awards.June 14, 2016

A Class 3-A all-state selection, the sophomore led the Pioneers in kills (464) and aces (53) on the way to their third straight state title and a new school mark for wins.

The honor was the second of the night for Hornung, who was also named the Southern Indiana Volleyball Player of the Year.

https://usatodayhss.com/2016/providences-marissa-hornung-named-southern-indiana-female-athlete-of-the-year
Providence's Marissa Hornung named Southern Indiana Female Athlete of the Year
I found this story on USA TODAY High School Sports and wanted to share it with you: %link% For more high school stories, stats and videos, visit http://usatodayhss.com.