Recruiting Column: What are college coaches really looking for?

Recruiting Column: What are college coaches really looking for?

USA TODAY High School Sports has a weekly column on the recruiting process. This isn’t about where just the top five-star athletes are headed but rather a guide to the process and the pitfalls for student-athletes nationwide from Fred Bastie, the owner and founder of Playced.com. Playced.com is an industry leader in college recruiting.  Their technology based recruiting service identifies the right colleges for potential recruits to pursue and provides a recruiting system that is second to none for student athletes of all talent levels and ages.

College coaches don’t really have to look too hard at the top 100 recruits in the country to be interested in them. Determining the other recruits to pursue is where they earn their pay. College coaches all evaluate players a little differently, but every college coach considers the entire package for every potential recruit.

If a college coach is seriously interested, they will evaluate you from the time you get off the bus for a game until you get on again. They watch how you react to adversity, how you interact with your teammates, and if you give 100 percent on every play. College coaches want players who play hard, are passionate about their sport, and who fight to the end.

Once a coach is sold on a player athletically, they want some assurances on the rest of the package. They will check your social media accounts and talk with your coaches not only about your ability, but about your character and work ethic. Offering a scholarship to a high school athlete is a big investment for a coach and they do their homework on every player before a decision is made.

Athletic ability is certainly the first factor college coaches look at in a recruit. Only the very best athletes play at the intercollegiate level and high school athletes need to understand that playing in college at any level is a tremendous accomplishment. Given that fact, if you want to play your sport in college, you have to pursue colleges that match your abilities to be successful.

Every potential recruit needs an objective, honest evaluation of his or her abilities. Not every high school football player can make the roster at Alabama and not every softball player will make the cut at Oklahoma. If you aren’t one of the best players on your team (or in your district) then pursuing a scholarship at an elite Division I program is like going to McDonalds and ordering filet mignon. You won’t get what you are asking for.

Every college coach in the country wants a roster full of players who are mentally and physically tough. They want focused, aggressive competitors. College coaches notice attributes like effort, fearlessness, and confidence.

They also want players who don’t let a mistake affect them. Guess what? College coaches all played the game. They weren’t perfect and they know you aren’t either. Don’t worry if you make a mistake in front of a college coach. They actually want to see how you react to that situation. Your reaction when you give up a goal, miss a layup, or strikeout tells so much more about you as a player than the mistake itself. Do you throw a fit, or forget about the last play and focus on the next one? Make the next play and the one after that. Great athletes play with confidence and have a short memory.

There are many reasons why coaches value academics so much in the college recruiting process:

Not only are your academic qualifications and achievements important to coaches, they can be beneficial to you. The more colleges you qualify for academically, the more college options you will have athletically. Your grades and test scores can expand or limit your ability to find a scholarship.

Last year a coach from Georgetown told one of our guys at a camp that he wished all the recruits had their grade point average on the front of their shirt. That makes my point pretty well!

The dictionary definition of coachable is “capable of being easily taught and trained to do something better.” Almost every athlete is coachable when they start their career. I’m not sure why, but that changes over time for some.

So, what does it take to be coachable?

College coaches want players who are coachable. It doesn’t take long for a coach to spot an uncoachable player and very rarely can a coach make a player coachable. Being a coachable athlete will go a long way with your current coach and prospective college coaches. Being coachable also means having a strong work ethic. Players that work hard in practice generally are more successful in games.

College coaches want players who will represent their team and the university in a positive light every day of the week and twice on Sunday. They aren’t interested in babysitting their players or explaining their behavior. For that reason, a player’s character is an important consideration for a coach.

An athlete’s character is always on display. You can count on the fact that coaches will be monitoring your social media accounts and making the assumption that the way you act on social media now is the way you will act on campus. They will certainly talk to your coach and perhaps even to your teammates. If you don’t pass the test on your character then don’t expect a scholarship.

The world of college athletic recruiting is extremely competitive. There are thousands of players looking for a roster spot. You really need to know what college coaches are looking for to have a leg up on your competition. 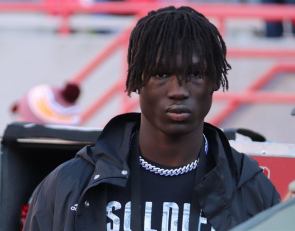 https://usatodayhss.com/2016/recruiting-column-what-are-college-coaches-really-looking-for
Recruiting Column: What are college coaches really looking for?
I found this story on USA TODAY High School Sports and wanted to share it with you: %link% For more high school stories, stats and videos, visit http://usatodayhss.com.