EUGENE — Nickels and dimes can add up to something huge.

Regis High School’s boys track and field team, despite not having an individual state champion, took every points paying finish that came it’s way and it amounted to just enough for the OSAA Class 2A state championship.

Regis finished with 59.5 points to edge out East Linn’s 57 points and earned the Rams the state championship Friday night at Hayward Field.

“After we dropped the baton at districts in the 4-by-1 we were really nervous about getting it, but this is huge,” said junior Brendon Woodcock. “It’s cool to get a banner for our school.”

It was Regis’ third state championship in boys track and field, the previous two coming in 1979 and 2006.

It was the 12th state championship between track and field and cross country that Regis earned in Mike Bauer’s 42 years as coach.

Though the Rams didn’t have an individual state champion, the team’s 1,600 relay team won its second straight state championship.

“The 4-by-4 definitely when they started three years ago gave us all something to get attached and motivated to get us through the hard days of training or whatever we had to get to,” Nieslanik said.

After winning the state championship – with Daniel Koellmann instead of Lulay – a year ago, repeating it was harder.

In the first leg, Union’s Dawson Kennon took the lead for his team in front of Regis’ Woodcock on Friday.

“Union’s first leg’s pretty fast,” Woodcock said. “He’s like top in the state. He got second. Usually the first legs I don’t get everyone’s fastest leg, but it was different having to try to chase after, but it helped a lot having to chase the fastest leg.”

Nieslanik chased down and passed Trevor Verhelst in the first 200 meters of his second leg, and the Rams would never again trail, this time winning in 3:31.14.

The state team championship was clinched by the relay, but a lot of individual performances built up to it. Regis’s Josh Mumey competes in the high jump at the OSAA Track and Field State Championships at Hayward Field in Eugene on Friday, May 20, 2016.

After a dropped baton by Regis’ 400 relay team at the district meet a week ago, the Rams could have folded up and called it a season.

“These guys after about 10 minutes moved forward with the meet and then they just kept charging from that point on,” Bauer said. “So very seldom does a team do that and then come back to put a meet together like this.”

In the 3A meet, Blanchet senior Ben Bartch won the state championship in the discus with a distance of 140 feet, 7 inches.

Blanchet’s Ben Bartch throws discus at the OSAA Track and Field State Championships at Hayward Field in Eugene on Friday, May 20, 2016.

Competing in track and field for the first time this season, Bartch had excelled all year and had the best mark in the state coming into the state meet, but was seeded second.

He threw 137-5 in his first throw of the competition, but was second behind Josh Martin of St. Mary’s up until his final throw.

“It was amazing,” said Bartch, also a standout in football and basketball. “My coach and I before my last throw, my very last throw to win, we said a prayer and everything. It was just like get in there and let’s just let it fly. It worked out.” 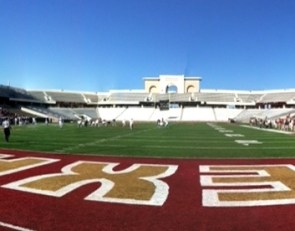 EUGENE — Nickels and dimes can add up to something huge.