Florida State running back commit Amir Rasul ran for three touchdowns and Notre Dame defensive end commit Khalid Kareem returned a fumble 14 yards for a touchdown and returned another fumble 78 yards as the East beat the West 28-13 in the Semper Fidelis All-American Bowl on Sunday.

Kareem was named the Most Valuable Player in the annual game sponsored by the Marines. The East has now won three of the five games.

“It’s just an honor to be here,” Kareem said. “It was a great experience to be around these Marines. They were getting on our butts every day about doing pushups, running, being disciplined. It was a great week.”

The East took advantage of West turnovers and a unique special teams play in the win.

In the first quarter, the West attempted a 57-yard field goal, and the East put Penn State commit Zechariah McPhearson (Riverdale Baptist; Upper Marlboro, Md.) in position to return. McPhearson got the ball several yards deep into the end zone and returned it all the way down to the West 3-yard line. Officially, it counted as a 97-yard return.

On the next play, Rasul ran it in for the score.

Missouri kicker commit Tucker McCann got the West on the board with a 33-yard field goal with 10:57 left in the second quarter. The West took its only lead of the game when Arizona State QB commit Dillon Sterling Cole found UCLA commit Theo Howard for a 17-yard TD midway through the second quarter.

Howard (Westlake; Thousand Oaks, Calif.) was planning to move into the dorms at nearby UCLA after the game. An early enrollee, Howard begins classes for the winter quarter on Monday.

The East then took a lead it would never relinquish when Kareem (Harrison; Farmington, Mich.) had the scoop and score with 4:15 remaining in the second quarter to make it 14-10. McCann added a 40-yard field goal before the half ended.

The East outgained the West 256-149 in the first half. Ole Miss commit running back D’Vaughn Pennamon (Manvel, Texas) had eight carries for 79 yards in the first half and finished with 15 times for 123 yards and three receptions for 20 yards.

West defensive end Isaiah Chambers, left, gets his hand on the ball, as East running back Amir Rasul runs for a first down Photo: (Alex Gallardo, Associated Press)

Rasul (Coral Gables, Fla.) added a 2-yard run for a 21-13 edge before Kareem stole the show again. After the West fumbled the quarterback running back exchange, Kareem picked up the ball and took it to the West 10-yard line. Rasul would then score his third TD of the game, from 7 yards out a few plays later.

The West had a first-and-goal situation with less than five minutes remaining, but the drive stalled and ended with a broken play on fourth down from the 5-yard line.

Among the quarterbacks, Oklahoma commit Austin Kendall, Michigan State commit Messiah de Weaver and North Carolina State Logan Byrd combined for 34 passing yards on 6 of 15 and a pair of interceptions by Byrd for the East. For the West, Oregon commit Terry Wilson was the standout, throwing for 111 yards on 10 of 19 with 46 rushing yards. 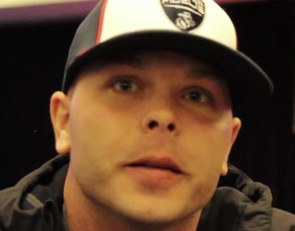 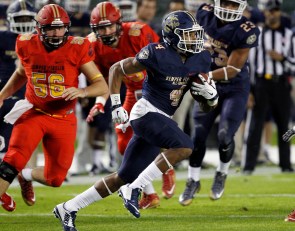 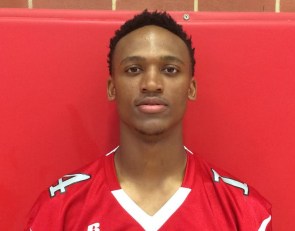