Scout and Rivals both released a revamped look at their top basketball prospects in the 2018 class this week.

New Albany’s Romeo Langford, to no surprise, ranked at No. 3 nationally by Scout and Rivals. The 6-4 Langford has a long list of offers that includes Indiana and Purdue as well as Duke, Kansas, Kentucky, Louisville, North Carolina, UCLA and more.

Scout and Rivals both ranked Marvin Bagley, a 6-10 Californian, and Zion Williamson, a 6-6 forward from South Carolina, at Nos. 1 and 2, respectively.

The Scout rankings, which go through No. 100, also have McCutcheon’s Robert Phinisee (No. 62) and Tindley’s Eric Hunter (No. 86) included. 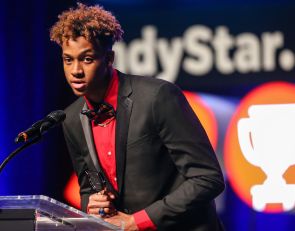 https://usatodayhss.com/2016/several-local-names-in-new-2018-rankings
Several local names in new 2018 rankings
I found this story on USA TODAY High School Sports and wanted to share it with you: %link% For more high school stories, stats and videos, visit http://usatodayhss.com.