SALT LAKE CITY — Six representatives from Region 9 advanced to the second and final day of the 3A state tournament at Liberty Park on Friday, but only one came home with some hardware.

Desert Hills’ Alani Plumb and Allie Beck pose for a picture after taking second in first doubles at the 2016 3A state tournament at Liberty Park on Friday.

Desert Hills’ Alani Plumb and Allie Beck finished second in first doubles after falling in the final two sets against Park City’s Julianna Signor and Brooklyn Thompson. Plumb and Beck looked dominant as they took the first set 6-4. After going down 4-3, Park City responded by taking the next three to send it to a decisive third set.

Plum and Beck looked determined to win it all after taking a 1-0 lead, but a number of unforced and forced errors gave the momentum back to Signor and Thompson, who rolled off the next four games. Despite a valiant attempt at a comeback, Plumb and Beck lost the third and final set 6-2.

Being the lone representatives in a championship game from Region 9 was not the only notable accomplishment for the duo. Plumb started the year playing No. 1 singles, but after an injury and a number of team changes and some reshuffling, Plumb and Beck started playing doubles.

“After injuring my shoulder and everything I switched to doubles, and I’ve been playing there since,” Plumb said. “We really didn’t start playing together until just a couple of weeks ago, but we were still able to accomplish a lot this year.”

Desert Hills’ Alani Plum and Allie Beck finished second in first doubles at the 3A state tournament at Liberty Park on Friday. Both are juniors and are already looking forward to a rematch next year against the Park City Miners.

“I love playing with Alani. She’s awesome and is so talented. She really brings a lot to this team,” added Beck.

Both juniors, Beck and Plumb are already looking forward to a rematch against Signor and Thompson next year.

“We are definitely going to use this as motivation,” said Plumb. “We want to win the whole thing, and we are going to work our butts off to make sure we finish it this time.”

“We don’t ever want to have this feeling ever again,” added Beck.

“Motivation is a great tool and that is something that will hopefully drive the team to get better every day,” he said. “I told the girls to remember how they feel right now and to use that to their advantage next year. We accomplished a lot both individually and as a team, and they fought hard all year. It was a real privilege being their head coach this year.”

Desert Hills’ Lyndsi Graf and Jocelyn Kennedy celebrate after a point against Grantsville during the 3A state tournament at Liberty Park on Friday.

The Thunder will bring nearly everyone back next year and will have the best shot to knock off Park City, which won its second consecutive championship.

In No. 1 singles, Pine View’s Hattie Erekson fell in the semifinals to eventual champion Naya Tillit from Ridgeline High School — one of two new schools this year. Tillit, a freshman, went on to beat Park City’s Livi Rockwood, who won first singles as a freshman last year.

In second singles, Region 9 had two girls reach the semifinals, but both were unable to reach the championship game.

Desert Hills’ Abbie Carmack competes during the 3A state tournament at Liberty Park on Friday.

Desert Hills’ Mo Behymer lost to eventual champion Gabby Rockwood from Park City 6-0, 6-1.  The freshman cruised into the semifinals before running into Rockwood, one of the top tennis players in all of 3A. Behymer lost just two points coming into Friday’s match against Rockwood.

Coming in as the No. 3 seed, Hurricane’s Candice Gubler upset Lexi Colson with a 6-2, 6-3 victory. Gubler then followed it up with a 6-1, 7-5 win over Juab’s Katja Braden before falling in the semifinals to Kristen Johnson from Ridgeline 6-3, 6-2.

In No. 3 singles, Desert Hills’ Abbie Carmack had the most intense match of the day when she took on Logan’s Annie Spach. The duo played three sets with two of them coming down to a tiebreaker. Carmack had a 6-5 lead in the third set, but couldn’t close it out as Spach made several incredible returns to knock off Carmack.

“It seems like they both didn’t want to move on and just want to keep playing each other,” parents said to one another during the final set.

In second doubles, Desert Hills’ Lyndsi Graf and Jocelyn Kennedy came up short against the eventual champions in Grantsville’s Marissa Linares and Maci Jackson. Graf and Kennedy pushed Linares and Jackson to the brink before losing in another tiebreaking game for the Thunder.

As a team, Desert Hills finished third, Pine View finished sixth and Hurricane finished in ninth out of 19 teams. 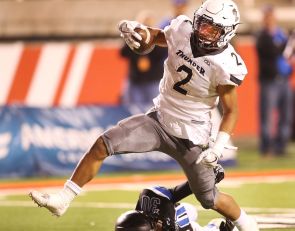 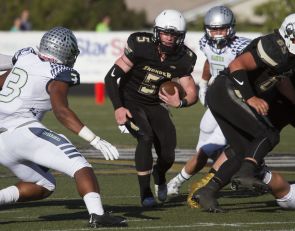 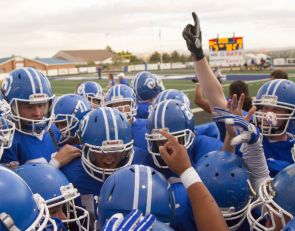