Super 25 Game of the Day: Paul VI at No. 16 DeMatha Catholic

Super 25 Game of the Day: Paul VI at No. 16 DeMatha Catholic 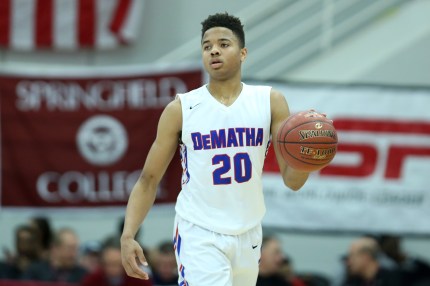 DeMatha Catholic’s Markelle Fultz #20 in action against Chaminade during a high school basketball game in the Hoophall Classic at Springfield College on Monday, January 18, 2016 in Springfield, MA. (Gregory Payan, AP)

UPDATED: Due to the weather in the area, this game has been postponed and rescheduled for Tuesday at 7:30 p.m. ET.

Paul VI player(s) to watch: Start with Louisville-bound guard VJ King, a McDonald’s and Jordan Brand Classic All-American. King is averaging 22.9 points per game. Corey Manigault, a 6-7 power forward, signed with Pitt in the fall. He had a season-high 29 points last week against DeMatha Catholic, fueled by 11 for 15 from the free throw line. Paul VI is 16-9 overall and comes in having won three of its last four games.

DeMatha Catholic player(s) to watch: Like King for Paul VI, the Stags are led by their own dual All-American in Washington signee Markelle Fultz. “Our first goal is to win the WCAC championship and the second goal is to get the national championship,” said Fultz, averaging 18.3 points per game. “We’re on the right path.” Fultz was a midseason candidate for American Family Insurance ALL-USA Player of the Year. He is joined by 6-6 shooting guard DJ Harvey, who is ranked as the No. 1 player in Maryland and the No. 3 shooting guard in the nation in the Class of 2017, according to 247Sports.com, and sharpshooter Nate Darling, who signed with Alabama-Birmingham.

What to expect: These schools have had some great games in WCAC play over the last few years and added another chapter just four days ago. DeMatha won 71-67 in overtime on the road on Thursday. Likely teammates in both All American games, King and Fultz again will be on opposite sides. King posted just nine points with five coming from the free throw line in his team’s loss last week while Fultz had 15. DeMatha (22-4 overall) enters the week a half-game behind Super 25 No. 7 St. John’s (Washington, D.C.) in the WCAC standings so this game has implications as the homestretch nears. St. John’s is scheduled to play Bishop McNamara on Monday.

https://usatodayhss.com/2016/super-25-game-of-the-day-paul-vi-at-no-10-dematha-catholic
Super 25 Game of the Day: Paul VI at No. 16 DeMatha Catholic
I found this story on USA TODAY High School Sports and wanted to share it with you: %link% For more high school stories, stats and videos, visit http://usatodayhss.com.