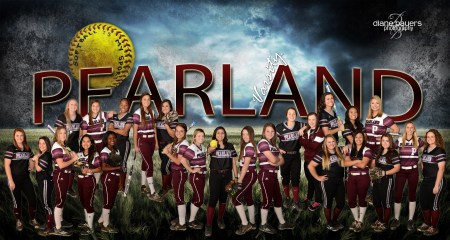 How deep is the Pearland (Texas) softball roster?

Fourteen seniors and three juniors have signed or are committed to play college softball.

That depth of talent and skill puts the Oilers at the top of the USA TODAY High School Sports/National Fastpitch Coaches Association Super 25 preseason rankings.

Pearland is coming off a 23-7 season in which it reached the third round of the highly competitive playoffs in the state of Texas. The team has won 86 games in the last three seasons.

“We have lots of work to do to uphold that (No. 1 distinction) in the future,” coach Laneigh Clark told USA TODAY High School Sports. “The team’s goal is to play one game at a time and to make it further in the playoffs than we did last year.”

The season began last week and the Oilers are 5-2 thus far with losses to 6A powers Keller 2-1 and Kingwood 4-2 in extra innings. The road gets no easier with a game against No. 15 Katy and a rematch with Kingwood at the Haynie Spirit Tournament this weekend.

But there is no doubt that Pearland has the firepower. Start with Georgia signee Sydney Gutierrez, a first basemen who hit a career-high .441 last season with a .553 on-base percentage and an .853 slugging percentage.

“Sydney is one of our go-to players at the plate,” Clark said. “She usually makes solid contact with the ball and is able to hit the ball all over the field.  She can also slap as well, making her a threat whenever she is at the plate.

In the circle, Pearland will rely on Alyssa Denham, a Louisiana Lafayette signee who was 21-3 last season with 181 strikeouts.

“She has all the tools physically to be one of the top pitchers in the nation,” Clark said. “She throws in the lower 60’s but can hit all her spots and has a change up to work with as well.  At 6-3, she is one of the best fielding pitchers we have ever had so it hinders the other teams from bunting. Offensively, she provides power and can spray the ball to all areas of the field.”

Mission Viejo (Calif.) begins the season at No. 2 after a 30-1 season that ended with a loss to Yucaipa in the CIF Southern Section Division II final. The Diablos were No. 1 in the Super 25 from the preseason all the way until that loss and finished No. 2.

The team has 14 players signed or committed to play in college, but moves forward without two of the best players in the country – outfielder Alyssa Palomino and Taylor McQuillin, both now at Arizona. Palomino, named to the American Family Insurance ALL-USA First Team last spring, was recently named the USA Softball Junior Female Athlete of the Year by ASA/USA Softball. McQuillin was the Gatorade National Player of the Year as a junior.

The Diablos will have two options in the circle to replace McQuillin with senior Hanna Nilsen and junior Kyra Snyder. Oddly enough, both are heading to Illinois.

Expect an early test against preseason No. 16 Los Alamitos (Calif.) on March 17.

The headliner continues to be pitcher Julia Jensen, a Nevada commit. Now a junior, she went 34-2 last season with 346 strikeouts in 211 innings. She also hit .447 with 43 RBI.

Jensen, the Gatorade Nevada Player of the Year, was named an ALL-USA honorable mention, one of of only four sophomores among the 40 to receive accolades.

Gainesville (Fla.) is No. 4 and is led by pitcher Katie Chronister, who won’t have to leave her hometown to play at the University of Florida. Chronister has been the team’s starting pitcher since her freshman year according to the Gainesville Sun and was a runner-up for 6A state player of the year.

Among the challenges Gainesville faces is moving up a class to 7A this season.

Pacifica (Garden Grove, Calif.) rounds out the Top 5. The team was 22-6 last season and many of those losses came in close contests that could have been wins. The battery of junior pitcher Hannah Boos and senior Arizona signee catcher Dejah Mlipola is among the best in the nation.

Only 10 of the final Super 25 from last spring are in the preseason rankings.

State rankings are submitted by state representatives and are used to compile the Super 25. The first Super 25 of the regular season will be March 24 and run weekly throughout the season.