Here’s a look at the top boys basketball teams in Middle Tennessee, as ranked by The Tennessean:

Ensworth and Tennessee signee Jordan Bone (3) are No. 7 in this week’s Midstate Top 10.

9. Lebanon (18-3) — The Blue Devils, second in 9-AAA, will be looking to avenge one of two in-state losses when they play host to district-leading Station Camp on Tuesday. Last week: No. 9. Streak: Won 5.

7. Ensworth (18-3) — After dropping their second East/Middle Region contest of the season, the third-place Tigers  bounced back to beat McCallie and Montgomery Bell Academy. Last week: No. 7. Streak: Won 2.

6. Oakland (18-2) — The Patriots have strung together four straight since losing to Independence on Jan. 15, and coach Troy Bond’s team will have a chance to avenge its only other defeat when it travels to Blackman on Tuesday. Last week: No. 6. Streak: Won 4.

4. Independence (20-1) —The 11-AAA leading Eagles captured a slow-paced 29-22 victory over district rival Ravenwood on Tuesday before scoring a 73-65 triumph over second-place Centennial on Friday. Last week: No. 4. Streak: Won 12.

1. Blackman (22-0) — The Blaze survived their closest call of the season Saturday but eventually escaped Border Wars in Birmingham with a 62-60 win over Spain Park (Ala.). Last week: No. 1. Streak: Won 22. 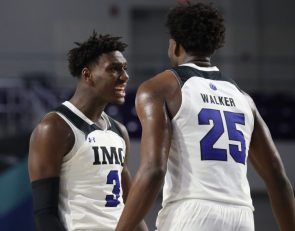 https://usatodayhss.com/2016/the-tennessean-midstate-boys-basketball-top-10-5
The Tennessean Midstate boys basketball top 10
I found this story on USA TODAY High School Sports and wanted to share it with you: %link% For more high school stories, stats and videos, visit http://usatodayhss.com.