The top offensive performers from the first round of TSSAA playoffs

The top offensive performers from the first round of TSSAA playoffs

Video: TSSAA first-round playoff recap
Tom Kreager and Michael Murphy recap the first round of the TSSAA high school football playoffs.
Cane Ridge rallies to beat Summit 35-21
Unbeaten Region 6-5A champion Cane Ridge scored 35-unanswered second-half points to top visiting Summit for the program’s first-ever playoff win.
Beech defeats Shelbyville
Beech beat Shelbyville 44-30 in the first round of the playoffs.
Goodpasture rolls past Harpeth 36-20
Jermaine Mason’s three first half touchdowns lead the Cougars over the Indians.
Riverdale 48, Bearden 27
Highlights of Riverdale’s 6A playoff win over Bearden.
Fairview cruises to playoff win
Highlights from Fairview’s win against East Nashville in the first round of the Class 3A playoffs.
Macon County buries Northwest to advance in 4A playoffs
Macon County rolled up 56 points in the first round of its 4A playoff victory against Northwest Friday.
Baylor pulls away from Pope John Paul II
Baylor 35, Pope John Paul II 20

A look at the top offensive performances from the first round of the Tennessee Secondary School Athletic Association’s football playoffs.

Teague rushed for 325 yards on 28 carries and scored three touchdowns in the Blaze’s 41-12 win over Jefferson County.

Mason had 263 total yards, including 96 on the ground and 167 receiving yards, in Goodpasture’s 36-20 win over Harpeth. He also had three total touchdowns.

Beech senior Alex Vanzant turns the corner on a first-quarter carry at Gallatin on Friday, September 30, 2016.

Vanzant rushed for 237 yards on 24 carries and scored three touchdowns in Beech’s 44-30 win over Shelbyville.

Norton completed 22 of 35 passes for 341 yards with three touchdowns in Davidson Academy’s 42-35 loss to FACS.

Pearl-Cohn sophomore Xavier Shepherd (8) has thrown for 400 yards and three touchdowns in his last two starts.

Shepherd was 9 of 12 passing for 130 yards and ran for 94 yards on five carries in Pearl-Cohn’s 70-0 win over Kenwood. He had four total touchdowns.

Riverdale’s Michael Scruggs (25) runs the ball against Bearden on Friday, Nov. 4, 2016, at Riverdale, during the first round of the TSSAA football play-off games.

Overton’s Taverius Travis picks a first down during the first half of Friday’s game.

Travis rushed 22 times for 204 yards and scored five touchdowns in the Bobcats’ 45-17 rout of Arlington.

Stratford’s Terrell Carter (1) runs the ball on a kick off return during first half of a high school football game against Marshall County on Friday, Sept. 23, 2016, in Nashville, Tenn.

Givens rushed for 184 yards on 25 carries and scored three touchdowns in Gordonsville’s 41-32 win over Hollow Rock-Bruceton.

DA running back Eli Breece (14) dives for extra yardage past BGA linebacker Cole Grosvenor (13) in the first half Friday.

Pope John Paul II QB Ben Brooks gets the pass of despite the rush of Baylor’s Walker Culver in Hendersonville, TN on Fri. Nov. 4, 2016. Photo by Dave Cardaciotto

Brooks completed 22 of 36 passes for 283 yards with two touchdowns.

Sanders completed 15 of 25 passes for 215 yards and two touchdowns in the Bulldogs’ 33-23 loss to Dobyns-Bennett.

Rice was 9 of 13 passing for 211 yards and three touchdowns in Wayne County’s 45-7 win over Middle Tennessee Christian.

11 things to do this weekend in Nashville

How can Christians support Donald Trump? 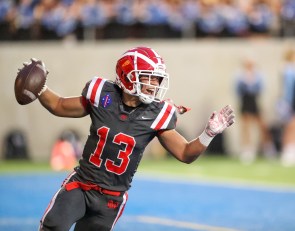 https://usatodayhss.com/2016/the-top-offensive-performers-from-the-first-round-of-tssaa-playoffs
The top offensive performers from the first round of TSSAA playoffs
I found this story on USA TODAY High School Sports and wanted to share it with you: %link% For more high school stories, stats and videos, visit http://usatodayhss.com.