HAYNESVILLE Haynesville’s march towards another undefeated regular season already feels almost inevitable, even if the Golden Tors don’t want to talk about it yet.

Plain Dealing (3-2, 1-1 District 1-1A) and Texas A&M signee Keldrick Carper dealt a few blows and missed a few more opportunities Friday night at Red Franklin Memorial Stadium. But the No. 1 Golden Tors (5-0, 2-0) looked in control virtually all the way in a 40-8 win to reach the halfway point unscathed.

“We’re happy to be where we are, but we want to keep improving,” coach David Franklin said. “That’s what it’s all about is keep improving every week.”

They’ve already passed their toughest tests, including a 26-20 win at Union Parish and a 30-26 win over Junction City (Ark.). Strong senior leadership makes a letdown less likely as they try to avoid their first District 1-1A loss since 2006 against Calvary and Evangel.

D’Arbonne Woods will bring a three-game win streak into next week’s game against visiting Haynesville, although an upset seems unlikely. The biggest remaining hurdle will come at home the following week against Cedar Creek, who looks like the second-best team in 1-1A once again.

The Golden Tors’ strengths are nothing new for a proud program only three years removed from its last undefeated season and state championship. Namely, plenty of size up front on both sides of the ball and a healthy, diverse stable of talented running backs to complement a dangerous dual-threat quarterback.

Jerious Bittle said they actually expected to need to pass more against the Lions, and Trent Franklin completed a 32-yard pass down the left sideline to Tyler Laprarie on Haynesville’s first play to set up Franklin’s six-yard touchdown run. But he would only complete two other passes for eight yards as the Golden Tors racked up 308 rushing yards with no one going over 100 yards or eight carries.

Consistent gains go with big play potential at any moment, as evidenced by Bittle’s 51 yard touchdown run on his first carry and Franklin’s 48-yard sprint to the end zone in the second half. Highly recruited junior Jamarceon Jackson only carried the ball three times for 23 yards, once for a 10-yard touchdown, while senior tailback Treyon Hunter added 67 yards against a Lions defense focused on stopping the ground game.

“The thing is, these guys have been running the same program since they’ve been coming up in little league,” Plain Dealing coach James Thurman said. “So they’re not going to make a lot of mistakes and you’ve got to be in the right spot and we have a lot of young kids playing out there.

“You line up wrong one team and they bust you.”

Still, Plain Dealing exposed some possible weaknesses and laid out the beginnings of a blueprint for an upset, starting with the first play from scrimmage. A halfback pass totally fooled the Golden Tors’ secondary, but a horribly underthrown ball went through the hands of Keldrick Carper all alone downfield for a costly, uncharacteristic drop.

Another halfback pass in the second half went through Derreon Washington’s hands along the sideline on what would have been a huge gain, and David Franklin said his defense made a few mistakes in coverage. Most of all, though, the Lions continually killed momentum and hurt themselves with 11 penalties for 117 yards.

“You can’t even play with a team like that with those kind of penalties,” Thurman said. “Proud of our kids, they didn’t give up. If we can fix those penalties we’ll be a much better ball team.”

They still could hardly do anything against a stout Haynesville defensive front led by junior lineman Jalan Harris. He helped hold Plain Dealing to just 81 rushing yards and 33 on 18 carries in the first half.

The bigger question remaining for these Golden Tors looks to be just how far they could go in the 1A state playoffs against a field without a clear favorite. Kentwood, who beat Haynesville in last year’s championship game thanks in large part to Alabama freshman Shyheim Carter, hardly looked invincible during an 0-3 start.

Teams like Logansport or Oak Grove could provide a challenge, and anything could happen. But a fifth straight trip to the Superdome and an 18th state championship certainly appears to be there for the taking.

Plain Dealing’s Kendrick Carper runs in for a two point conversion after scoring a touchdown in the second quarter against Haynesville.

Haynesville’s Jerious Bittle breaks up a pass to Jarvis Jackson of Plain Dealing.

Haynesville’s Jamarceon Jackson runs in for a touchdown against Plain Dealing Friday night.

Haynesville’s Michael Turner gets a hold of Plain Dealing quarterback Matt Sullivan who is soon sacked.

Plain Dealing quarterback Matt Sullivan drops back for a pass against Haynesville. 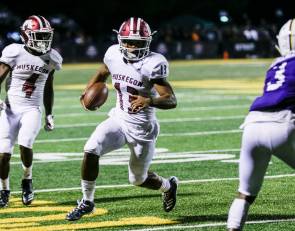 Though Muskegon QB Cameron Martinez has excelled at his position, Ohio State might have other plans for him 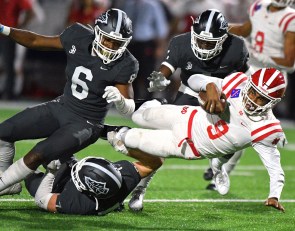 What We Learned: No. 1 Mater Dei stays undefeated, beats No. 3 St. John Bosco 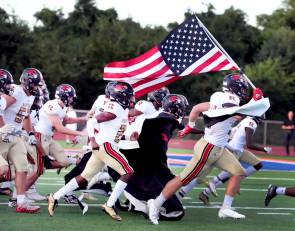