Terrance Ferguson dunks during the McDonald’s All American Game, but he will be in the 3-point contest Friday in the High School Slam event (Photo: Mike DiNovo, USA TODAY Sports)

The slam dunk contest, the boys 3-point contest and the girls 3-point contest each has eight competitors. The event will be taped at Glenda Dawson High School in Pearland, not far from the site of this weekend’s men’s Final Four. The broadcast airs Sunday at 3:30 ET on CBS.

“We’re pleased to showcase the amazing talents of these student-athletes at the 2016 championships,” said Telisa Yancy, vice president of marketing for American Family Insurance. “We salute these and all student-athletes who successfully balance the demands of school and athletics with hard work and dedication to pursue their dreams. Congratulations and best of luck to all the competitors who earned a position on this year’s roster.”

Here are the competitors for each event: 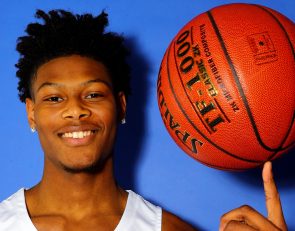