As a member of the West team for the Under Armour All-America game, Hagen Danner can contribute as a catcher or a right-handed pitcher. At just 17, he’s not ready to choose one position or the other, or pull a Bugs Bunny-esque move of pitching and catching at the same time.

“I’m just going to let people tell me what I do best,” Danner said to USA TODAY Sports.

He’s one of country’s best baseball players who will play at Wrigley Field for Saturday’s game, but the spotlight isn’t new for Danner. When he was 12, he played for Huntington Beach’s Oceanview Little League team, and the group won the Little League World Series. Danner hit a home run in his team’s win over Japan, and even appeared on an episode of Sportscenter with his teammates.

He still ranks the home run as one of his top three sports accomplishments.

He committed to UCLA early on. While it was important for Danner to stay close to his family in Huntington Beach, and he also felt a draw to the school from a young age.

“When I was eight years old, I would go to all the games at that field, then I was going into my freshman year of high school, and they came and watched me play. I went on a tour, and they offered me. After a month, I knew,” he said.

Like any high school baseball player, Danner thinks about the draft and playing professionally, but he has his senior year and college to think about first.

“Yeah, that’s what I want to do for my career, but college is awesome. I really want to have that opportunity, as well,” he said. 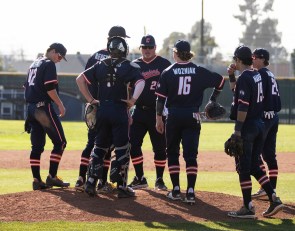 Under Armour All-America Game: What We Learned

https://usatodayhss.com/2016/ucla-baseball-commit-hagen-danner-used-to-the-spotlight
UCLA baseball commit Hagen Danner used to the spotlight
I found this story on USA TODAY High School Sports and wanted to share it with you: %link% For more high school stories, stats and videos, visit http://usatodayhss.com.