Gulf Breeze’s aerial attack has taken the area by storm in the first month of the 2016 season.

The high-flying Dolphins will aim to defend the homefield tonight, looking to get back on the winning track in their district opener against the Milton Panthers (2-3).

“Their offense is unbelievable,” Marsh said. “They’re throwing the ball well, their receivers don’t drop balls. They’re highly consistent in what they do.”

Milton High School quarterback, Aubrey Williams, (No. 7) hands of the ball off to running back Desmone Knight (No.1) during Friday night’s game against Pine Forest.

The Panthers have gotten off to a slow start in 2016, highlighted by a disappointing offensive effort in a 28-7 loss to Pensacola Catholic on Sept. 16.

Their most recent loss, a 23-20 overtime defeat against Pine Forest, went over differently in the Panther locker room, however.

“We played a lot better than we did the week before and in the [Pine Forest] loss we learned a lot about our team and our character,” Marsh said. “We felt we made some improvements in all areas of our team.”

The Panthers rallied from a 14-point first-quarter deficit and shut out the Eagles in the second half to eventually force overtime.

“The momentum we had from the Pine Forest game, we want to bottle that back up from the second half and bring it into this Gulf Breeze game,” Marsh said. “That’s what we’ve been talking about all week because sooner or later we’re going to get some breaks to go our way.”

The strategy Milton used against Pine Forest could come in handy against the Dolphins and first-year head coach Bobby Clayton, who was the offensive coordinator at Pine Forest last year.

The goal is to avoid a “track meet” and keep Gulf Breeze’s talented receivers like Tristan Covell and Parker Baynes contained.

“I don’t know if we’ll be able to match their scoring, so we’re going to try to slow them down,” Marsh said. “Our big deal is to put points on the board and force them into a few punts. We can’t have them getting into an up-and-down type football game.”

Should the Milton defense succeed, it’ll be up to quarterback Aubrey Williams and the Panther offense to help the Panthers avenge last season District 2-6A shootout elimination.

“Our hands are full. We know we’re the underdogs,” Marsh said. “We’re just going to come in and put forthour best effort to try and pull off the upset.”

Who: Gulf Breeze vs. Milton

Milton High School defensive back Martavious Odom (No. 2) intercepts a Pine Forest High pass inside the 5-yard line during Friday night’s game against the Eagles. 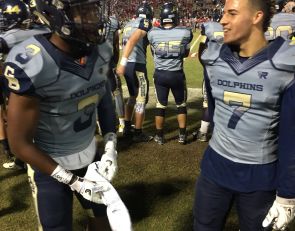 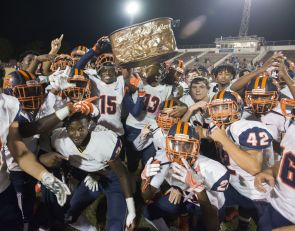 Clean sweep: EHS makes it four in a row 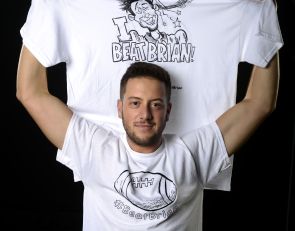