IMG's Tehoka Nanticoke scoops up ground ball, swims a defender and finishes with the between the leg shot! #SCtop10 pic.twitter.com/AuQgQ6pwE3

IMG Academy (Bradenton, Fla.) attacker Tehoka Nanticoke scooped this ground ball, weaved through a trio of defenders and absolutely befuddled the goalie for this quick strike.

Considered one of the nation’s top Class of 2016 recruits based on word of mouth alone — creating all sorts of buzz even before most talent evaluators even saw him play — Nanticoke lived up to the hype with a pair of stunning highlight videos from his junior season at IMG.

Give 3drising.com credit for getting on the Nanticoke train early, with this summary in 2013:

This kid is a wizard with the stick. Wild around the world passes and behind the back flip passes without ever looking are normal for Tehoka. Without ever needing to run full speed, he made it defenders look like they were stuck in cement by getting them to chase the tempting target of his stick held up in the air. With great ball handling from his fellow attackmen, Tehoka often got the opportunity to do the finishing on the crease. Without ever needing to really throw a stick fake, Tehoka only really needs to throw a shoulder fake and the goalie will fake himself out guessing where the ball is going to get placed. Something else that really stuck out for me was his ability to play with a defensemen hanging right on his back. Using the pressure and rolling around defenders, nobody seemed to have the answer to the question: how do we stop Tehoka Nanticoke?

And here’s how Recruiting Rundown described the wonder of Nanticoke in 2015:

Hailing from the Six Nations reservation in Ontario, the scorer uses a sturdy 6-foot and nearly 200 pound-frame to back down his defender and protect the ball. That’s a skill, along with his pinpoint shooting, that Nanticoke has developed through years of box with the Six Nations Rebels. His stick is an extension of his hands, stymying defenders and goalies alike with insane fakes on the doorstep. He doesn’t have a burst of speed but doesn’t really need one. He probably doesn’t even need a left hand either, considering how dominant he is with his right. The ease with which he finishes 1-on-1’s is certainly impressive, but so too is his ability to feed teammates on the fast break with tremendous unselfishness. In general, Tehoka’s creativity with a lacrosse ball in his stick is second to none in comparison to anybody else currently in high school.

And if there were any critics remaining who weren’t sure if Tehoka Nanticoke would live up to his lofty status as an elite recruit, he just silenced them with this sick between-the-legs goal. 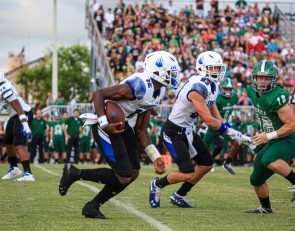 What We Learned: Alabama power Hoover no match for Super 25 No. 10 IMG Academy 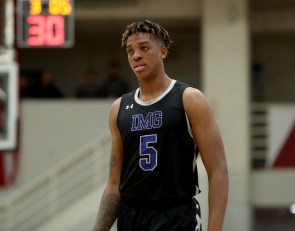 https://usatodayhss.com/2016/video-tehoka-nanticokes-between-the-legs-lacrosse-goal-of-the-year-candidate
VIDEO: Tehoka Nanticoke's between-the-legs lacrosse Goal of the Year candidate
I found this story on USA TODAY High School Sports and wanted to share it with you: %link% For more high school stories, stats and videos, visit http://usatodayhss.com.