They say military members accomplish more before breakfast than the average person does in a day, so the standard for work ethic at the U.S. Army All-American Bowl participants is pretty darn high.

Let’s check in on some of them during practice leading up to Saturday afternoon’s game.

Here’s Columbus (Ga.) Carver dual-threat quarterback Jawon Pass hitting fellow Georgian Mecole Hardman — an athlete out of Elbert County (Elberton, Ga.) working as a wide receiver here — for a one-handed grab along the sidelines. Was it a catch? Does it matter? It’s impressive either way, and let’s not forget these kids are working opposite four- and five-star defensive backs, too.

Still not impressed? How about Stephens County (Toccoa, Ga.) offensive tackle Ben Cleveland making the most impressive throw of the day — hitting a trash can on a corner route in the end zone?

Even the most stoic of drill sergeants couldn’t get a kick out of a bunch of U.S. Army All-Americans playing catch and praying with kids receiving treatment at San Antonio’s University Health System.

After a busy day of football, fun and philanthropy, we’ll leave you with a U.S. Army soldier teaching players how to stand at attention. And they thought their high school football coaches were tough. 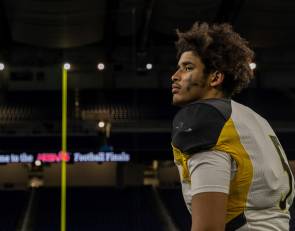