She runs track, plays basketball, lacrosse and soccer. But her passion is baseball.

She’s got a killer pitch, and a throwing arm that’s the envy of boys her age- although she’s missing is a right hand.

“When I was younger, I didn’t think it was a big deal, but I realized as I grew up that I’m a girl. And I don’t have a hand. And everybody else is a guy that has two hands, and I can compete with them,” said Apgar.

Apgar was born with a birth defect called Hypoplasia. She had eleven surgeries before the age of four. Surgeons took the bone out of her shin and toes to build a hand.

“Since I’ve never had two hands, I’ve never known any difference, so I just learned like everybody else did,” said Apgar.

Her father, Thomas Apgar said she took an interest in the sport at the age of two. He said she takes the drive to play ball and uses it to excel in all areas of her life.

To throw and catch she has to switch the glove off and on the same hand.

“It’s amazing, I’m in awe, just to see how talented she is to be able to shift her glove so quickly off,” said Sullivan.

When she goes up to bat, Apgar uses a prosthetic arm with an attachment that fits onto the baseball bat. She’s been through eleven arms because she plays so hard.

But not all of the boys teams have been friendly to her. Apgar said she’s played with teams who refused to let her play.

“They didn’t treat me equally: they would bench me, and they wouldn’t even call me by my name,” said Apgar.

She kept sitting on the bench and made sure her game got even better.

“I wasn’t going to quit the team because that’s what they wanted me to do and I’m not going to give in to something like that.”

For Apgar- it isn’t all love for the game that keeps her going.

She said she does have something to prove: “That just because I don’t have a hand, which I can still play with everybody else.”

She said she wants other girls out there to know they what it takes too. 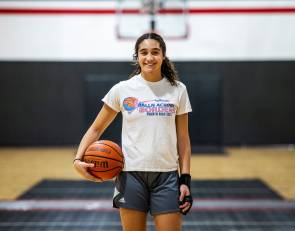 https://usatodayhss.com/2017/15-year-old-girl-excelling-in-baseball-despite-having-just-one-hand
15-year-old girl excelling in baseball despite having just one hand
I found this story on USA TODAY High School Sports and wanted to share it with you: %link% For more high school stories, stats and videos, visit http://usatodayhss.com.