8. Southern Door (12-4): The Eagles held on for a 47-44 victory over Kewaunee Friday to keep pace with the Storm in the Packerland Conference standings.  Previously: UR.

9. Kewaunee (13-3): The Storm will face a tough test Saturday when it hosts Hortonville in a nonconference game. Previously: 7.

Ja’Staria Brantley, G.B. East: The senior guard tallied a game-high 22 points Thursday to power the Red Devils to their first Bay Conference victory of the season over Menasha.

Morgan Meerstein, N.E.W. Lutheran: The senior went 7-for-10 from 3-point range in scoring a game-high 28 points to lift the Blazers to a Thursday at Gibraltar.

Greta Sleeter, Suring: The senior connected on six 3-pointers in scoring a game-high 30 points Friday in a win over Marinette St. Thomas.

Stoughton at West De Pere, Saturday: The unbeaten Phantoms will face a tough test in a meeting between Division 2 teams ranked in the top five of both state polls.

Ashwaubenon at G.B. Southwest, Saturday: The first of two meetings between two young teams on the rise.

1. Bay Port (12-2): Finished a 3-0 week with a huge overtime win against Pulaski in a showdown between the final two undefeated teams in the Fox River Classic Conference. Pirates have won eight straight. Last ranking: 1.

2. Pulaski (12-2): Had an impressive 11-game winning streak end in loss to Bay Port. The Red Raiders still have a chance to win or share the FRCC title with eight games left, including a rematch against the Pirates on Feb. 17. Last ranking: 2.

4. Luxemburg-Casco (12-2): After beating Little Chute, the Spartans have started to separate a bit from the rest of the North Eastern Conference. Every other team has at least two losses in league play while L-C remains undefeated. Last ranking: 4.

7. Peshtigo (11-2): Dealt first loss in the Marinette-Oconto in a 52-51 defeat at Suring. Still leads conference by one game after beating Lena on Friday. Last ranking: 6.

Bryce TeKulve, Luxemburg-Casco: Had 19 points, nine rebounds, four steals and three assists against Little Chute. Also had 20 points in a win over Waupaca and 26 points and eight rebounds against Wrightstown.

Ben Wittig, Ashwaubenon: Another big week for the standout senior guard, who had 27 points against North, 20 against Southwest and 29 points, six rebounds and five steals against Manitowoc.

Pulaski at Ashwaubenon, Tuesday: The Red Raiders crushed the Jaguars 63-24 in the first meeting on Jan. 7, which was part of a three-game skid for the Jaguars. Ashwaubenon has been playing better recently but this is a big test.

Denmark at Wrightstown, Thursday: The Vikings beat the Tigers 58-50 in December after losing by an average of 30.5 points in two losses to Wrightstown last season.

De Pere at Bay Port, Friday: The Redbirds’ FRCC title hopes are probably over, but it still can impact the race when they meet the Pirates. 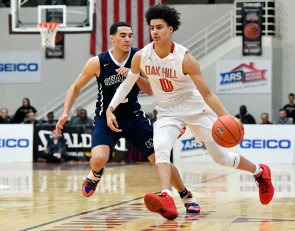 Former ALL-USA players could be affected by college basketball scandal