Hamilton Southeastern’s Zach Gunn, Ben Davis’ Aaron Henry, Tindley’s Eric Hunter, Warren Central’s Mack Smith and North Central’s Kris Wilkes were selected to the first team by IndyStar. Gunn, Smith and Wilkes are seniors, while Henry and Hunter are juniors. Here is a closer look at the players, as well as the second and third team and honorable mention selections:

The 6-6 Gunn, a Ball State recruit, averaged 21.2 points, 8.5 rebounds and 2.1 assists per game for Hamilton Southeastern, which finished 21-6. Along the way, Gunn set school career records for scoring (1,657) and rebounds (791). Gunn was a four-year starter at Hamilton Southeastern, helping the Royals to the regional championship game as a freshman.

The 6-5 Henry led Ben Davis to its first state championship since 1996. The Giants caught fire in mid-January and didn’t stop, winning 14 consecutive games and capped its Class 4A title with a 58-55 win over Fort Wayne North Side. Henry averaged a team-leading 14.2 points, 6.6 rebounds and 3.8 assists as a junior. He shot 42 percent from the 3-point line.

The 6-3 Hunter was named the City Player of the Year and went on to lead Tindley to its first state championship in the Class A game. Hunter averaged 25.5 points and 7.2 rebounds as a junior and shot 52.7 percent from the 3-point line (79-for-150). Hunter has 1,836 career points through his junior year with a chance to finish as the leading scorer in Marion County history.

The 6-2 Smith, who recently committed to Eastern Illinois, led Warren Central to unprecedented success as a senior. The Warriors won the Metropolitan Interscholastic Conference outright and were ranked No. 1 in the state, both first-time accomplishments. Smith averaged 19.5 points, 6.0 rebounds and shot 44 percent from the 3-point line.

The 6-7 Wilkes, a McDonald’s All American and UCLA recruit, was named the Marion County Player of the Year for a second consecutive season. Wilkes scored 30 points or more six times as a senior, averaging 22.1 points and 7.0 rebounds. North Central was 77-22 in Wilkes’ four seasons, winning two sectional titles. Wilkes finished with 1,831 career points.

There are four seniors on the second team and one junior. Kevin Easley, a 6-7 junior, led Lawrence North to a 17-10 record and the championship game of its sectional. Easley averaged a team-leading 17.6 points and eight rebounds and his teammate, 6-9 senior Ra Kpedi, averaged 10 points and a team-high 11 rebounds. Also named to the second team were 6-5 Manual senior Courvoisier McCauley (26.8 ppg), 6-2 North Central senior Mateo Rivera (13.0 ppg, 3.8 assists, 3.5 rebounds) and 6-4 Crispus Attucks senior Nike Sibande (22.0 ppg, 7.2 rebounds). Sibande led Attucks to the Class 3A state title, the program’s first since 1959.

There were 30 players who received honorable mention recognition:

Isaiah Thompson of Zionsville gets around Jack Skaggs of Logansport Friday, March 3, 2017, in the Boys Basketball Sectional at Lafayette Jefferson High School in Lafayette.

Lawrence North Wildcats Kevin Easley (34) celebrates after connecting on a three-point shot against the North Central Panthers during their IHSAA 4A sectional final basketball game at North Central High School on Saturday, March 4, 2017. 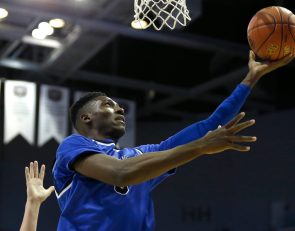