Amid controversy, a new anthem for student-athletes: Discuss rather than debate

Amid controversy, a new anthem for student-athletes: Discuss rather than debate

A song that’s supposed to bring people together has pushed many apart. A country called the United States of America might be more divided than ever. Three weeks after a full-scale protest by NFL players during the national anthem, the controversy rages on.

Who is standing? Who is kneeling? Is it right? Is it wrong and whyexactly are they doing it?

On and on it goes, from professional sports to high school and college athletes. The controversy has sparked conversation in locker rooms, dinner tables and classrooms.

“My job as an educator is to make sure kids listen to both sides,” says Al DeCarlo, 53, a former lacrosse coach who teaches American history and American government at Pittsford Mendon High School. “When we started talking about this I made it very clear: Nobody is going to change anybody’s mind. Don’t try to change anybody’s mind, just hear each other out, and when we walk out of here we’re going to — unlike Congress and unlike America as a whole right now — respect each other and agree to disagree.”

That’s the most important lesson, says DeCarlo and other educators and coaches, adding that the anthem controversy can be a teachable moment for all. It’s also possible that teens and twentysomethings are handling the issue better than older generations. Why? 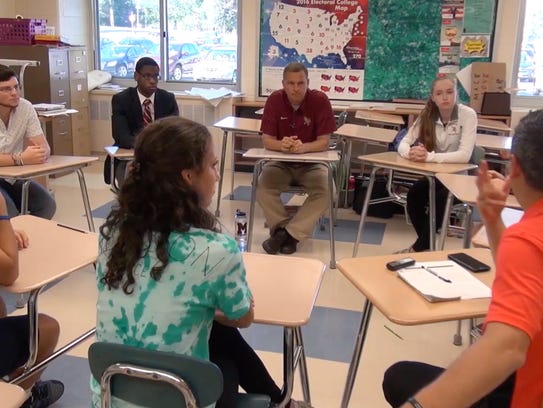 “We’re more open to understanding change. We’re able to hear people out and sort of not bash them or label them for it,” says Marc-Henry Dorval, one of six Mendon seniors who along with DeCarlo sat down with the Democrat and Chronicle to discuss the anthem controversy.

“We want,” adds another student, Megan Hauer, “to be good Americans and improve our country.”

A handful of swimmers for the girls team at Irondequoit knelt during the national anthem on Sept. 26. (Photo: PROVIDED)

Three weeks ago at Irondequoit High School, six swimmers knelt during the anthem before a girls’ meet with Pittsford. Two of them were African-American. On the same night at the same school a few hours later, the public-address system failed before a girls volleyball match. The Eagles and girls on the opposing team, Rush-Henrietta, spontaneously sang the anthem.

Officials at Irondequoit High declined to make their student-athletes available for comment on this story —- an ironic twist in a story about the First Amendment — but Athletic Director Kim Schon did say there is open dialogue there about the anthem among teachers and coaches.

“Kids are well-aware of the world around them,” she says. “What we’re hoping as educators is they learn how to make these choices and decide what they believe in. We respect our student-athletes’ individual rights.”

Some people wonder if President Donald Trump does. He continues to be divisive, critics say.

On Tuesday, he tweeted: “Why is the NFL getting massive tax breaks while at the same time disrespecting our Anthem, Flag and Country? Change tax law!”

After news broke that NFL owners would soon meet and reportedly consider drafting stricter anthem protocol for players, Trump tweeted again Wednesday, this time mentioning the NFL commissioner: “It is about time Roger Goodell of the NFL is finally demanding that all players STAND for our great National Anthem-RESPECT OUR COUNTRY.”

It was just the latest back-and-forth between Trump and NFL owners.

“I think he should protect our freedom of speech before he protects his own opinion,” Pittsford’s Hauer says of Trump.

Other than the Irondequoit girls swimmers on Sept. 26, it appears there have been few protests by area high school teams. None have been reported. The Greece School District acknowledged that a student was told to leave a girls volleyball match at Olympia on Oct. 6 after he sat during the anthem.

But the ejection was the result of him being “disrespectful” to school officials after being approached. Kathy Graupman, superintendent of schools, wouldn’t discuss specifics of that incident, maintaining that students have the right to participate in the Pledge of Allegiance every morning at school or the anthem.

“It’s not our policy to make kids stand,” Graupman says.

That was an individual protest, not a team.

Graupman says her district looked closely at policy and educating staff about it last fall after the Kaepernick controversy started. She also says kids not standing or reciting the pledge has been going on for years, back to her teaching career, which ended in 2002.

The World of Inquiry boys soccer team made headlines last fall by protesting, but the Rochester City School District squad has not protested this fall.

“I think we paid a price for taking a knee,” coach Rich Paufler says, adding that he feels it has been more difficult to fill the team’s non-league schedule.

The first weekend after the NFL’s Sept. 24 kneel-down, Section V football coordinator Scott Barker was bracing to hear about at least a few protests by players or teams. He heard about none.

“I think there has been open communication between adults and kids … where maybe they didn’t feel the need that this was where they wanted to protest,” says Barker, who is also Pittsford’s athletic director.

It’s important, educators say, to understand that discussion with players by a coach doesn’t mean, “Do as I do.” Sky Crain, a Pittsford football player who was in the discussion in DeCarlo’s class, says Panther coach Keith Molinich talked about the anthem and respecting each other’s rights, but never influenced players based on his own belief.

“The NYSPHSAA is in the business of providing support for education-based athletics and does not have specific statewide regulations regarding pregame ceremonies or the national anthem,” the statement from executive director Robert Zayas read. “It is important to remember that high school sports are an extension of the classroom. It is our sincere hope that these actions generate meaningful discussion among the high school communities as a whole, as opposed to unilateral praise or condemnation.”

“Our country is in a rut right now because no one can agree to disagree anymore,” DeCarlo says. “It’s ‘you’re wrong and you’re stupid if you don’t think the way I do.’ That’s perpetuated by media sources, including social media, and to an extent, the President.”

DeCarlo opens his classes daily by talking about current events. He wants teens to think critically about what they believe and why they feel that way. But, he also teaches them to respect each other.

“I have juniors and seniors, so they can handle this conversation,” DeCarlo says.

His students welcome it. Macey Chasman, says it helps them handle the inevitable discussions that happen outside the classroom. “We can understand each other more and it can actually translate to helping solve other problems if we’re not always trying to silence people,” says Dorval.

Chris Widmaier, a science teacher and instructional coach for staff at World of Inquiry (School No. 58) says it’s important that students know they can share their opinions and beliefs without recourse.

There’s a difference in those words, a conversation is not a confrontation.

Graupman, the Greece superintendent, is proud of a club at one of the district’s four schools, Arcadia. The student-run organization called “Mosaics” is active doing community events and talking about race and social issues.

“Our kids are incredibly smart and open,” Graupman says.

Fewer NFL players have knelt in recent weeks. But the controversy continues.

“That’s positive about all this,” says Marc Callari, Irondequoit girls volleyball coach whose players sang the anthem the night when the P.A. failed, “People are having conversations about it, and it’s good.”

For more, visit the Rochester (N.Y.) Democrat and Chronicle