The 2016-17 azcentral.com Sports Awards, presented by Arby’s, will honor the best student-athletes and those who support them.

The azcentral.com Sports Awards, presented by Arby’s, will honor an Athlete of the Year in every sport at the event on April 30.

At the end of each season, azcentral sports will announce three finalists for each Athlete of the Year award. The finalists are listed alphabetically.

All three will be invited to the awards show where the winner will be announced live.

A Coach of the Year in every sport also will be selected at the end of each season. From the winter sports honors, a finalist for the overall Coach of the Year award will be announced and invited to the event.

Tickets are on sale for the event at sportsawards.azcentral.com.

The 6-foot Danny Baca and his twin brother, Robby, fed off of each all season all the way to the 6A Conference state championship.

Danny Baca had 37 goals, none bigger than the one he scored in the second half to beat Tolleson 1-0 in the final. He had eight game-winning goals during the season. In the state playoffs, he scored six goals and assisted on another. In a semifinal win over defending state champion Hamilton, Baca had two goals and made the penalty kick that advanced the Tigers to the final, avenging last year’s state championship loss.

“It’s always a dream to be able to score the winning goal,” Baca said. “I had a chance to score a goal in the state championship last year against Hamilton. But it ended up that we lost.

“To be able to come back and beat that team in the semifinals, then to come through again in the state championship game and get the goal at the end, it’s always a dream. It just worked out that way.”

Coach Jeff Perry felt Baca was the hottest player in the state all season, finishing with 11 assists for the 17-2-1 Tigers. Baca had 21 goals in 12 power-points games during the regular season.

“In the state tournament alone, he scored three goals against North in the first round, he had the game-winning assist in a 1-0 win over Mesa in the quarterfinals, he scored two goals against Hamilton and scored the game-winning penalty kick in the shootout,” Perry said. “He scored the only goal in the state championship game. He led our team and school to its first outright soccer title in the school’s 100-year history.

Carter Clemmensen, 6-foot-3, had 36 goals and eight assists, finishing with 80 points for a team that was seeded first in the 6A Conference state playoffs. He had a goal in a shootout state semifinal loss to Tolleson. Twice, he scored four goals in a game – against Phoenix Horizon and Scottsdale Coronado. He had back-to-back three-goal games against Chandler Basha and Phoenix Desert Vista late in the season.

“We wanted to win the state championship like we do every year,” said Clemmensen, who has committed to UC Santa Barbara. “I thought it was a big letdown (losing at state). But we had a lot of juniors this year, and we’re ready to reload for next season.

“We’re looking forward to our senior year because we have eight guys who have played together for a couple of years.”

“His technique and athleticism allow him to hold the ball up and, combined with teammates, while around the box, Carter is extremely dangerous, having the ability to beat defenders and score from anywhere right or left foot,” Allen said. “Carter has always been a top performer, but he was never really sure how to lead when he was younger. As one of the quieter guys on the team, he leads by example. Always works hard at practice and takes the game very seriously. Because he is so quiet, though, when Carter voices his opinion to the team, it is heard loud and clear.

“Carter’s soccer career is just getting started. Committing to UCSB will allow Carter to showcase his skills at the top level. I am blessed to have Carter back next year for his fourth season with Brophy and foresee him doing big things in college and beyond.”

Josh Drack was azcentral.com Sports Awards Big Schools Boys Soccer Athlete of the Year last season when he led Chandler Hamilton to the state title. Statistically, he was even better this year, scoring 34 goals and assisting on 20 others.

Drack helped Hamilton rally from a 3-0 halftime deficit to tie Gilbert late in the semifinals with a penalty kick, only to fall in an eventual shootout.

“I did not miss a PK in two seasons, and I hit the post (in the penalty kicks phase of the game),” Drack said. “It wasn’t meant to be, I guess.”

Drack signed with Grand Canyon University. He will be 17 when he enters college. He spent part of last year in Portland, playing for a high-end club program, where he said he learned to play another position.

“Josh Drack is the player that is on the field before and after every session – the first to arrive and the last to leave,” Markette said. “He is also the student-athlete who is first to pitch in picking up gear or setting up equipment. People often comment on how good he is, but we know it is also because few people match his work ethic.”

Big Schools Coach of the Year

Season recap: Led by a great senior nucleus, this team won 20 consecutive matches, including a state semifinal shootout win over Phoenix Brophy Prep, the school’s first win over the soccer powerhouse since 1988. Tolleson was held scoreless for the first time in a 1-0 championship loss to Gilbert. The Wolverines finished 20-1, and, despite being a five seed in the 6A Conference tournament, beat Chandler 3-2, No. 4-seed Tempe Corona del Sol 3-2 and No. 1-seed Brophy Prep to reach the final. The Wolverines scored a 6A-best 110 goals. This was Andronic’s fifth season as Tolleson’s head coach. He watched the seniors mature since they were freshmen and lost a shootout to Desert Vista in the playoffs. He contributes much of the success to his assistants, Guillermo Armenta and Rodrigo Lopez. This team, Andronic said, “was a complete and well-balanced package that every coach dreams of.”

Coach Andronic’s comments: “This team could defend just as well as it could attack. This team could also control the midfield, as everyone worked for one another. Our team was led by a very strong senior class who were part of the penalty shootout loss against Desert Vista in 2013-14 as freshmen. That taste of playoffs as freshmen was motivating enough to keep the team driving forward in our playoff run this year. I am proud of what our team accomplished this year and they will go down as one of the best soccer teams to put on a Tolleson uniform.”

Rarely does a back-line player become an Athlete of the Year candidate. But Bryan Delgado was key to Scottsdale Coronado’s 4A Conference state championship. He scored the PK goal against Tucson Salpointe Catholic to win it in the final.

He led a back line that posted eight shutouts this season.

“Bryan is one of the best natural leaders I’ve been around,” Coronado coach Nick Barker said. “This season, his fighter mentality helped fuel the program to new heights. Bryan’s teammates followed his lead and were motivated by his passion for the game.

“Though many of his teammates are more technically advanced, they all look up to and respected Bryan. He earned the favor of his teammates through servant leadership and committing to do the small, unnoticed and undesirable things required for success.”

Delgado said he didn’t need to be in the spotlight.

“I might have been the center, but it was an all-defensive effort,” he said. “We always knew how to play with the ball and without the ball. I think that was the strong part of our team that helped us achieve what we did.”

He scored the game’s only two goals in the 2A final last season against Lakeside Blue Ridge.

“I did put a little pressure on myself (last season), saying, ‘Maybe I should try harder, maybe I could accomplish winning again,’ ” Gomez said. “But instead of scoring more goals, I wanted to make more assists. Either way, it came out the way I wanted it.”

Gomez felt he got faster and improved his techniques in his final season. He was versatile enough to go from center on defense to forward.

“He’s the one who puts the ball in the back of the net,” coach Todd Carey said. “The big thing for him, he always scores goals in big games. Whenever we played tough competition, he didn’t back away from that. We always relied on him to score goals.”

With the graduation of last year’s Small Schools Boys Soccer Athlete of the Year, Jorge Ruiz, Ramon Urbano was thrust into the leading role. He responded with 28 goals and seven assists, capped by a two-goal performance in the 3-0 championship win against Phoenix NFL Yet. It capped a third consecutive state championship for Yuma Catholic, which moved up a division this year.

“This was a team that had a chip on its shoulder,” Urbano said. “We were the underdog. We felt people were overlooking us because we lost a lot of seniors from last year.

“Honestly, every practice our mindset was to get to the finals. I didn’t expect to score as much as I did. But I knew I had to step up.”

“Ramon came to practice every day focused and with the desire to learn and improve his skill set and be the best player he could be,” Evans said. “He is respected and truly liked by all the other players. Ramon is a team leader without trying to be. He leads by example and works for the good of the team his achievements are just the result of making the team better.

“Ramon is patient and tries to work with his teammates to play a better game of soccer. But he has little time for players who are not there for the good of the team. He recognizes and accepts his mistakes and tries to adjust his game so as not to make the same mistakes again.”

Small Schools Coach of the Year

Season recap: This was supposed to be a rebuilding year after capturing the past two state championships at a lower division. The move up to the 3A Conference only motivated a young, resilient team that went 17-2-1 and captured the 3A title, behind Ramon Urbano’s 28 goals and seven assists and Eleterio Gutierrez’s 22 goals and 19 assists. The Shamrocks scored 130 goals and gave up just 13.

Coach Evans’ comments: “They were able to do this because of their teammates’ support. We had one of the strongest defenses this season. We had 48 goals scored from our four starting midfielders, seven goals from our starting defense, 25 goals from our subs. This was truly a team effort and everyone contributed to the ultimate goal of winning a state championship.”

Led 4A state championship team with 0.5 goals against average.

6A runner-up team’s top defender, he was able to attack to the tune of four goals and 11 assists.

Had 28 goals and seven assists, leading 3A power to state championship.

Unmatched work ethic, led perennial 6A powerhouse in scoring the past two seasons.

Had six game-winning goals en route to the 6A state championship.

Had eight game-winning goals and finished with 37 goals, including the championship winner vs. Tolleson.

UC Santa Barbara commit had 36 goals, eight assists for the top seed in the 6A tournament.

Suggest human interest stories to Richard Obert at richard.obert@arizonarepublic.com or 602-316-8827. Follow him at twitter.com/azc_obert. 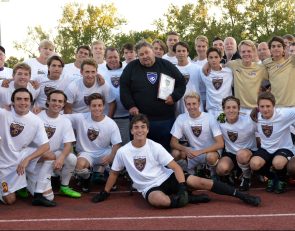