As Wendy Flores gabs with her teammates while warming up during a recent high school cross-country meet in Cedar Falls, the 17-year-old senior quietly repeats that day’s goal to herself.

Finish the course in under 40 minutes.

For many runners at this meet, completing a 5K in less than 40 minutes is a virtual certainty. But Wendy is different from her peers, a fact she’s rejected most of her young life.

Legally blind, she’s Dubuque Senior High School’s first visually impaired cross-country runner. And though she may be running on the same course as everyone else, she’s running her own race.

It’s a race that doesn’t end by beating a rival school or getting to the state championship. It’s a race where doing your best is more than enough and where finally understanding that being different doesn’t mean being less than everyone else is as good as coming in first.

It’s the race Wendy has been running her whole life.

After years of being bullied in middle school, Wendy built a wall between herself and the outside world in an attempt to hide her disability.

Each demeaning comment about her sight added a new layer of drywall, and each snicker when she tripped on the stairs was another coat of paint.

The “old Wendy,” as she calls her younger self, was always scared and embarrassed to ask for help.

But as the finish line of high school approached, she decided to break through the wall she’d built. Come graduation, what happens in her life will be her choosing, she said, so why not try something she’s always wanted to do: running.

She also wants to master the techniques and gain the confidence she needs to continue running while she can.

The condition that causes her blindness, retinitis pigmentosa, is a rare degenerative disorder, meaning her vision will likely continue to fade. She may eventually lose the ability to see entirely.

But that is far from Wendy’s mind as she prepares to run on this sticky afternoon. The course at Cedar Falls is difficult, featuring steep hills and uneven ground, and she is a bit nervous about how close the track is to a small pond.

She joined the team a week into the season, and this was her second race. But Flores said she likes to count smaller victories: Each step closer to the finish line marks a new high point on her journey to self-acceptance.

“When I’m running, I feel proud and strong like I can finish the run,” she said. “I just feel the breeze and enjoy the run. Like nobody else has done before.” 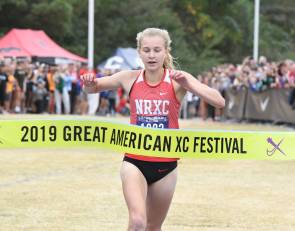 https://usatodayhss.com/2017/blind-iowa-teen-finds-her-bliss-running-on-cross-country-team
Blind Iowa teen finds her bliss running on cross-country team
I found this story on USA TODAY High School Sports and wanted to share it with you: %link% For more high school stories, stats and videos, visit http://usatodayhss.com.