Two headlines that once would have made me angry.

I suppose, at one time in my life, and not so long ago, I would have hated this idea. IMG is the antithesis of what high school sports are supposed to be about. The Florida academy, for example, thinks nothing of poaching top players from around the country.

But if it’s OK for some of the top basketball schools in the state to play, say, a Findlay Prep in a holiday tournament, why shouldn’t Chandler take on IMG? I’m sure Chandler’s players and fans love the idea. Who wouldn’t get jazzed about playing the No. 1 team in the country (at least according to those meaningless national polls)?

So bring it on.

Just one thing: It is not a high school football game. Don’t call it that. Don’t expect me to. Ever.

Remarkably, I’ve heard all kinds of justification for Ball taking 61 shots in Chino Hills’ 146-123 victory over Los Osos on Tuesday. His older brother, LiAngelo, was sidelined with an ankle injury so more of the offensive load fell to LaMelo. He was hot, so his teammates kept feeding him the ball. And this one: Who did it hurt, anyway?

Are you kidding me?

I can’t think of a better – or is that worse – example of putting self over team. I know the game has changed over the years, but there’s still something very wrong about one kid taking 61 shots in a 32-minute game. (Do the math.)

Los Osos coach Dave Smith said this to the Los Angeles Times: “It’s about integrity and sportsmanship. When only one kid shoots every shot but one in a quarter, that’s not right. That’s not, as coaches, what we’re supposed to do.”

If I was Chino Hills’ principal, I’d be having a talk with coach Stephan Gilling. But I seriously doubt that will happen. After all, Ball’s 92 points were the No. 1 story on ESPN’s “SportsCenter.”

That’s all that matters, right? 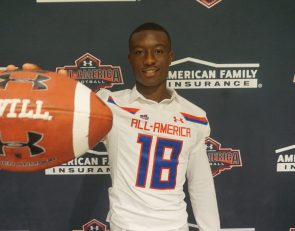 Miami Central's Robert Hicks, Chandler Jones stick together for Under Armour All America Game and Louisville

https://usatodayhss.com/2017/bordow-thoughts-on-chandlerimg-game-balls-92-points
Bordow: Thoughts on Chandler-IMG game, Ball's 92 points
I found this story on USA TODAY High School Sports and wanted to share it with you: %link% For more high school stories, stats and videos, visit http://usatodayhss.com.