LUMBERTON, Texas – When she dropped her son off at Lumberton High School for football practice last August, Jessica Saenz Treviño had no idea that by the end of the day he would be undergoing brain surgery after a helicopter trip to a Galveston hospital.

Juan Treviño, Jr.’s dreams of wearing number 55 as a Raider this season were left on the field that Friday afternoon when coaches say he suddenly collapsed at practice for no apparent reason.

Football is the heart and soul of many in Lumberton and as the Raiders took the field when the season began one of their own would be missing.

“I was just dropping him off for practice and never imagined my son going through something after that,” Treviño told 12News.

“I don’t wish this on anyone,” said the doting football mom.

Junior, as his family knows him, was suffering from traumatic brain injuries that ended up leaving the once healthy 15-year-old confined to a hospital bed in what doctors described as a “vegetative state.”

Days became weeks as the family who once took trips to Disney World was now facing an extended stay at Junior’s bedside.

“I just wanted my son to open his eyes,” Treviño says.

Tears well up in Treviño’s eyes as she recounts the words of the doctors.

“They said he’d be in a vegetative state and have so many disabilities. They said he’s bound to a wheelchair for the rest of his life,” she recalled. “You tell your children to give it their all, and all these dreams and goals were taken away from him.”

“Hearing that as a parent hurts when you have a normal healthy teenager,” she told 12News.

After several weeks in a coma, Junior opened his eyes in what Treviño describes as a family miracle.

Next Junior was transferred to the TIRR Memorial Hermann Rehabilitation Center in Houston.

“When he arrived here he wasn’t aware of any of the events,” said brain injury rehabilitation specialist, Dr. Ana Durand-Sanchez.

Doctors were now in search of a cure for his traumatic brain injuries.

“I don’t know what happened on the field because I was not there, but It was a bleed that was in more than one area of the brain. That’s why so many functions were affected,” Dr. Durand-Sanchez explained.

“There can be a number of causes, stroke, hit, fall, or it can be related to abnormalities in the structure of the brain and not show up until a period of time after,” said Dr. Durand-Sanchez.

After several months of rehabilitation, Junior was able to stand up again.

“If he can get back on track, that would be amazing,” Treviño said.

“Just the fact that he’s progressing now it’s more than amazing to me,” she continues.

One small step for junior then turned into two, and then three and four steps.

In taking those first steps, Junior was defying the odds of being told he may never walk again.

“We’re able to look at the doctors and say they were wrong this time,” Treviño says with a smile.

Junior is continuing his long road to recovery step by step and a word at a time.

Junior may not be able to play football today, tomorrow, or even in the next few months, but in the community’s heart, he has already made the winning play of the game.

Treviño wants to thank the entire community for their support and prayers saying “without them we wouldn’t be able to be strong.”

Just two weeks ago Junior was walking down the rehab center’s hallways and now he’s walking around his home.

“It’s the best thing to witness my son surpass the things they said he wasn’t going to be able to do,” Treviño says. 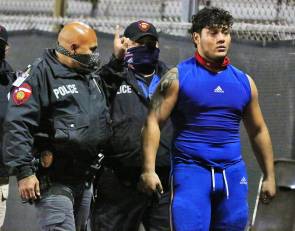