The basketball world let out a collective gasp in September when the FBI announced that 10 people, including adidas executives and assistant college coaches, faced federal bribery and fraud charges related to paying recruits’ families to attend certain colleges with the understanding that the players would later sign with shoe companies and specific agents when they turn pro.

One of the former high school stars linked to the investigation was Brian Bowen, a 6-foot-6 wing who signed with Louisville.

According to the affidavit, Bowen’s father, Brian Sr., was promised $100,000 to send Bowen to Louisville and eventually place him with sports agent Christian Dawkins and other advisers once he turned pro.

As a result of the FBI probe, legendary Louisville coach Rick Pitino was “effectively fired” and in November the school announced that Bowen would remain on scholarship but would not be permitted to rejoin the team.

Bowen recently told ESPN’s Outside the Lines that he found out about the allegations “the same way as the whole media” and that he didn’t believe his father was involved.

“I didn’t know anything, anything at all,” Bowen said.

Bowen’s fall from grace was swift and hard.

Louisville granted Bowen permission to transfer, but no word yet on whether he plans to take his talents elsewhere despite being cleared in the bribery investigation by the FBI. 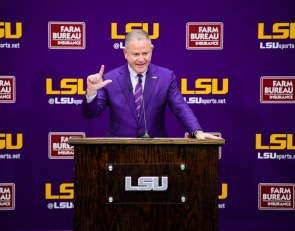 https://usatodayhss.com/2017/brian-bowen-rick-pitino-ncaa-scandal-fbi-louisville
2017 Top 5 Countdown: Brian Bowen linked to FBI probe into college hoops
I found this story on USA TODAY High School Sports and wanted to share it with you: %link% For more high school stories, stats and videos, visit http://usatodayhss.com.