Cam Newton: 'Justin Fields is the best recruit in the country'

Cam Newton: 'Justin Fields is the best recruit in the country'

“Justin Fields is the best recruit in the country. Write that down,” he told SECCountry.com during the NFA 7v7 National Championships at IMG Academy over the weekend.

Newton, the Carolina Panthers quarterback who was a five-star prospect a decade ago, coaches Fields as part of the Cam Newton 7v7 program.

Fields, from Harrison (Kennesaw, Ga.), is ranked as the No. 1 dual-threat quarterback and No. 3 player overall in the 247Sports Composite rankings for the Class of 2018.

He recently decommitted from Penn State and has more than 40 scholarship offers. He told news reporters at IMG that Auburn, Florida, Florida State and Georgia are the main four schools and listed Alabama, North Carolina and Ole Miss as involved.

While in Florida, Fields took part in a camp at Florida State camp. At times, it seemed as if every Seminoles coach, including Jimbo Fisher, was watching Fields when his turn came for reps.

As for playing for Newton’s team and building a relationship with him, Fields said he values the experience.

“Growing up when he was at Auburn, he’s kind of who I modeled my game after,” Fields told SECCountry. “So it’s definitely great learning from him. …

“Cam tells me just do what’s best for me. All these colleges, they want you to come help them. But really, just find the best fit for you.” 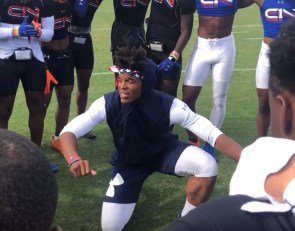 WATCH: Cam Newton coaches his 7v7 team at IMG, and things get lit 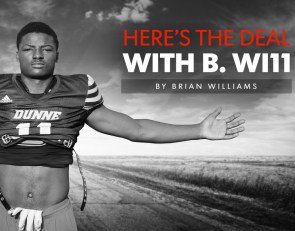 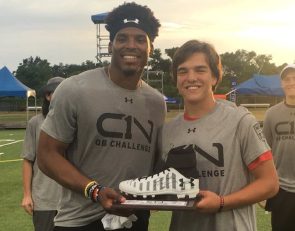 https://usatodayhss.com/2017/cam-newton-justin-fields-is-the-best-recruit-in-the-country
Cam Newton: 'Justin Fields is the best recruit in the country'
I found this story on USA TODAY High School Sports and wanted to share it with you: %link% For more high school stories, stats and videos, visit http://usatodayhss.com.