He came from the spectator seats, which is where legend has it he took – and made – some of his 3-pointers.

Teddy Dupay, on the 20th anniversary of the night he scored 49 in a City of Palms Classic game, returned to the court to take on Spencer Freedman, this year’s 3-point champion.

While Dupay gave the old-school fans a warm memory Wednesday night at Suncoast Credit Union Arena, Ranney School’s Scottie Lewis provided the highlights for new-schoolers in the slam-dunk contest when he had two perfect scores in the championship round to top Orlando Christian Prep’s CJ Walker.

“This is a high-class event,” said Lewis, surrounded by youths and young ladies who wanted to take a picture of him. “There’s a lot of people who can bounce.” 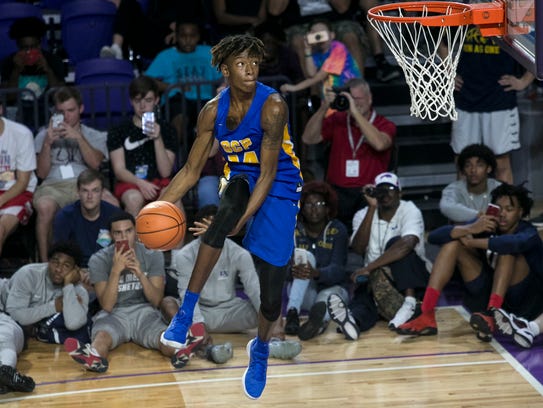 CJ Walker of Orlando Christian Prep does one of his dunks that got him into the finals of the dunk contest at the City of Palms Classic on Wednesday in Fort Myers. Walker was the runner-up. (Photo: Amanda Inscore, The News-Press)

Dupay was one of the judges of the slam-dunk contest.

Tournament director Donnie Wilkie – who knows good theater and COP history as well as anyone – welcomed back the former Mariner High star.

“Donnie, he knows basketball so well,” Dupay said. “He calls me and says, ‘Can you believe it’s been 20 years since the last year you played?

“We talked about this tournament. I was a ball boy when it was at Harborside, working 18 hours a day, thanks to the Pollocks. I loved it. Then it moved to Bishop Verot. It’s been a big part of my life.”

Now 38, Dupay has a basketball academy and will host seven basketball camps in Puerto Rico for youths there. Dupay has visited the Caribbean Island and fears it never may be the same.

In 2015, Dupay tried to break the Guinness world record for 3-pointers in various time spans, including the 24-hour mark (10,381). He did it as a fundraiser.

On this night, he had a minute to try and dispatch California’s Mater Dei’s (Santa Ana, Calif.) Freedman, who had scored 21 points to reach the finals, then 24 in the championship to top Kaukauna’s (Wis.) Jordan McCabe.

Ever the competitor, Dupay meticulously lined up the ball racks at an angle he wanted. Taking just one warm-up, he started cold before finishing on fire and scoring 19 points.

But Freedman, a Harvard commit who one day wants to be President of the United States, hit another 24 to win.

Dupay still holds the Florida State high scoring mark with 3,744 points. He had games of 38, 49 and 56 points his senior year in the City of Palms. The point guard then went on to play at Florida.

When asked if it feels like 20 years since playing in this event, Dupay responded, “It’s been more like 100.”

Using a variety of windmill dunks, Lewis scored 96 to move into the finals. Dupay and the other judges took a few boos with their scoring. When Lewis upped his level of dunks in the finals, he was rewarded.

“At the time, I didn’t think about (the perfect scores),” said Lewis, who has a vertical-inch jump of 40 with two free straight up and 45 with one step.

Walker, who scored a 93 in the finals, thought he performed well.

“Nobody likes to see guys jump over short people,” he said. “So I got some tall people in there.”

For more from the City of Palms, visit the Ft. Myers News-Press

It was quite a night at the City of Palms Classic.