The streak continued with Bret Fedewa’s state title at 152 pounds in Division 2.

Both wrestles came in undefeated, Fedewa with 52 wins and Gross with 56.

“Just toughness and hard work,” Fedewa said of what he believes made the difference. “You’ve got to wear them down. Got my body prepared, my mind prepared. I was just ready to go out there and win it, focus.”

Warren Lincoln’s Jelani Embree won his second Division 2 state title by taking the 189-pound match over Will Feldkamp of Dexter. Like the 152-pound match, both wrestlers came in undefeated.

Warren Lincoln’s Jelani Embree keeps his eye on the referee while wrestling Lowell’s Danny Kruse during the Division 2 171-pound championship match at the state individual wrestling finals at the Palace on Saturday.

“It’s kind of nostalgic, being my senior year, my last year actually wrestling in the Palace,” said Embree, among the top high school wrestlers in his class in the country. “Before the match I was just looking up, trying to soak it all in, looking at the crowd. This is a special place.

“There’s almost something fictional in my mind as to how hard I’m trying to work,” Embree said. “I’m chasing guys, even the guys I’m planning on beating in college. I’m even picturing the guys who are in Russia or Iran with names I probably can’t pronounce right now, to beat in my Olympic dreams.”

Dominic LaJoie won his third championship after a wild, 16-12, victory over Corbyn Munson of Chelsea at 125 pounds.

“I was kind of upset about that,” Lieber said of the seeding. “Obviously I proved them wrong. It just made me want to prove them wrong.”

Thompson said Friday that Lieber would be tough after placing second, third and second his first three years coming to the Palace.

“Last year was a devastating loss, I think about it every day, during practice, if I’m about to give up, I just remember I want that state title so bad,” said Lieber, who will wrestle next at Central Michigan. “I’m so happy. I’ve been dreaming about this day for four years, honestly.”

Dundee’s Brandon Whitman won his third consecutive title, this time at 189, to set up a potential run at a fourth next year.

It almost didn’t happen as Whitman said he injured his knee over a month ago in a practice session with a college wrestler. He said he rested initially but the last few weeks he’s gone at it pretty hard.

“The first couple of matches (after injury) it was a little hard to get back into it,” Whitman said. “I had to gain my confidence to shoot and everything. But it felt pretty good coming into the state tournament.”

Clawson’s Katlyn Pizzo, right, poses on the podium Saturday at the Palace.

“Last year she wanted to place so bad and this year’s she’s been working so hard,” said coach Terry Downs. “Ever since the day after, March 4th last year, so I knew she was going to place. Happier than (heck) that she’s placed.”

Trent Hillger of Lake Fenton won his third state championship with a tech fall in 3:15 of the heavyweight match against Luke Tromp of Lake Odessa-Lakewood . Hillger’s teammate Jarrett Trombley also earned his third consecutive title with a 9-6 decision at 130 pounds.

Division 4: Tylor Grames of Hudson upset defending champion Erik Birchmeier to win the 189-pound state title, and defending champ Nick Cooper was  taken down by Devon Kozel of Bangor at 215. 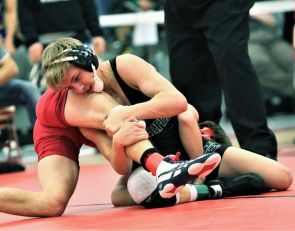 After his controversial suspension from the WIAA was lifted in court, a Waterford (Wis.) wrestler earns a chance to win another state title 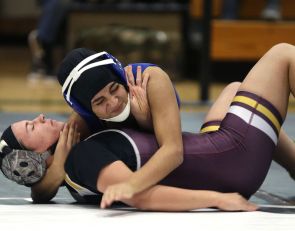 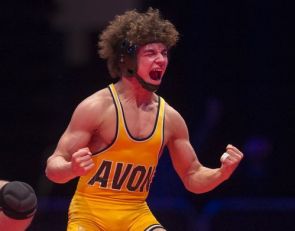 It takes all kinds to win a state wrestling title, even the occasional goofball