Dallas Mavericks guard Yogi Ferrell celebrates with forward Dirk Nowitzki after hitting a shot late in the fourth quarter of the game against the Portland Trail Blazers at the Moda Center. Dallas won the game 108-104.

Tom Crean has seen that look before, that sneering defiance that spread across Yogi Ferrell’s face after his 3-pointer in the final minute Friday night capped a 32-point explosion, clinched the Dallas Mavericks’ victory at Portland – and continued the former IU guard’s storybook NBA debut.

“Iowa game,” Crean was telling me Saturday morning, referring to Ferrell’s 3-pointer in March 2016 that gave IU the Big Ten title. “Same facial expression he had when he hit the shot against Iowa. I was texting about that with his mom this morning. There’s such a joy to his game.”

Joy, yes, with a dose of defiance. See, even after the 6-foot Ferrell produced 1,986 points (sixth all time at IU) and 633 assists (first) – and earned Big Ten All-Defensive honors as a senior – nobody picked him in the 2016 NBA draft.

“So disappointing,” says Ferrell’s father, Kevin, who watched that draft on TV with his son. “I almost wanted to cry, but it just fueled him. It made him want to prove to the NBA that he does belong here.”

Brooklyn signed him but released him twice, most recently on Dec. 8, and seven weeks passed before Dallas picked him up on Jan. 28. In the meantime, Ferrell was averaging 18.7 points and 5.8 assists for Long Island of the NBA Development League.

And Dallas was desperate. Point guards Deron Williams (toe) and Jose Juan Barea (calf) were injured and unavailable when the Mavericks found Ferrell in Erie, Pa., six hours before tipoff of an NBADL game there. Yogi caught the first plane to Texas and was up the next morning at 8 for a crash course of Dallas’ playbook.

The Mavs played at San Antonio that night. Ferrell started at point guard, opposite Tony Parker, and had nine points and seven assists.

Dallas won, its first victory in San Antonio since 2011.

Dallas won the next night against defending NBA champion Cleveland, the Mavs’ first victory against a LeBron James-led team since 2011, with Ferrell – 19 points on 15 shots – outplaying Kyrie Irving (18 points on 21 shots). Dallas won its next two games as well, beating Philadelphia on Wednesday and Portland on Friday.

Dallas Mavericks guard Yogi Ferrell reacts after making a 3-point basket against the Portland Trail Blazers during the second half of an NBA basketball game in Portland, Ore., Friday, Feb. 3, 2017.

Until Ferrell did it to Portland, only two undrafted rookies in NBA or ABA history had reached 30 points within their first 15 games, (Connie Hawkins in 1967, Anthony Morrow in 2008).

This is a crazy story, perhaps the NBA’s most unlikely coming-out party since Jeremy Lin gave us Lin-sanity in 2012, and the Portland game was the craziest of them all. Ferrell went 9-for-11 on 3-pointers, held Trail Blazers star Damian Lillard to 13 points on 4-of-20 shooting, and buried the clinching 3-pointer with 19.3 seconds left.

Kevin Ferrell was there, believe that. Yogi’s starting in the NBA? Dad had to be there, leaving his Indianapolis-based business, Ferrell Cleaning Company, to his seven employees and flying to San Antonio, then Dallas, then Portland, and now Denver. The Mavs visit the Nuggets on Monday.

Kevin Ferrell has seen his son maintain the work ethic that got him to the NBA in the first place. The day of the Philadelphia game, Yogi worked out with the team that morning and went home, but stayed just 30 minutes. Back to the gym he went for two hours of shooting. Yogi played 38 minutes that night.

“You can’t measure his heart – you can’t gauge that,” Kevin Ferrell says. “I think he’s showing: This is who I am. And none of this surprises me. The kid was born to play basketball, it’s just that simple. He’s not playing this way for a little while. This is just who he is.”

Few players had as storied a career at IU as Yogi Ferrell did.

It’s who he always has been, dating to his days at Park Tudor, which he led to state championships in 2011 and ’12, and then at Indiana. Nobody was going to outwork Yogi Ferrell, which posed Tom Crean with an unusual problem.

“I had to get smarter about how to use Yogi during his last couple of years here,” Crean says. “I’d have him go maybe 20 or 30 minutes of an hour-and-a-half practice and I’d just take him out the rest of the way. You wanted to conserve his energy because he put so much into everything.”

Those were the days Yogi would go to Cook Hall to get up shots by himself. Well, until Crean got wind of that.

“There would be days we’d say: ‘That’s it. Don’t come back tonight,’” Crean says. “Victor Oladipo was the same way. You’d have to stop them before they got there. Amazing how far that can carry you.”

Could have carried Yogi all the way from Park Tudor to IU to … the Pacers. If only the Pacers had called. They never did, and now Yogi Ferrell is averaging 17.8 points, 5 assists and 1.8 steals as the starting (and still undefeated) point guard in Dallas.

Yogi Ferrell runs shooting drills during a pre-draft work out with the Indiana Pacers, at Bankers Life Fieldhouse, July 17, 2016.

“If the Pacers would have called,” Kevin Ferrell says, “that’s where we would’ve been. The economics would not have mattered – he would’ve been thrilled to play for the Pacers, his hometown team. He would’ve played there for free.”

No chance now. The Mavericks know what they have, within hours of the Portland game replacing the 10-day contract Ferrell signed on Jan. 28 with a two-year deal.

“He’s an opportunistic guy,” Dallas coach Rick Carlisle told reporters after the game, “and it’s pretty clear that he’s out to prove a point.”

Find IndyStar columnist Gregg Doyel on Twitter at @GreggDoyelStar or at acebook.com/gregg.doyel. 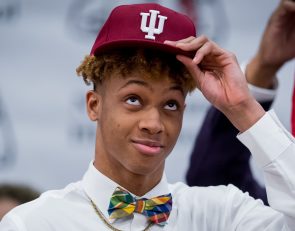 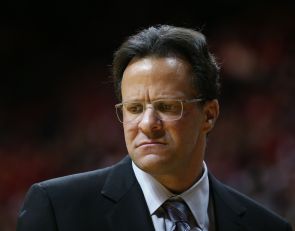 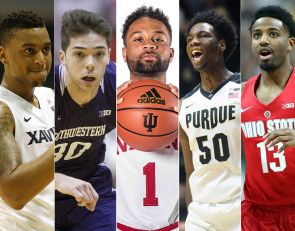