It was a wild and wooly way for Dallas Jesuit to earn its first win, but by game’s end the Rangers had a win, five touchdowns from E.J. Smith … and two pairs of dirty jerseys.

As reported by the Dallas Morning News, Jesuit’s dark grey jerseys with black numbers at its game against Richardson Berkner were deemed to be a violation of a new regulation that requires team uniforms to feature numbers that are sufficiently distinct from the background color of the jerseys to ensure that referees can tell which player is which.

The penalty for the violation is one lost timeout per quarter while the jerseys are worn, with Jesuit forfeiting two of its three first half timeouts as a result of the gray jerseys.

Despite the lost timeouts, Jesuit found itself tied at the half, 28-28, then used a famous scion to turn on the jets in the second half. E.J. Smith, the son of Hall of Fame Cowboys running back Emmitt Smith, finished the game with five touchdowns to lead the Rangers to a 56-34 victory, the team’s first of the season.

Was the win a result of E.J. Smith running wild or the halftime jersey switch? Whatever the reason, don’t expect Jesuit to make the same uniform mistake twice. 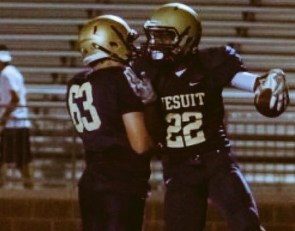 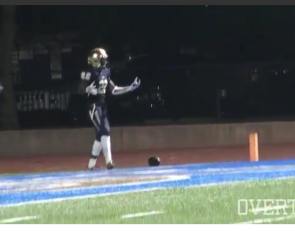 https://usatodayhss.com/2017/emmitt-smith-son-ej-smith-five-touchdowns
Dallas Jesuit loses timeouts for wearing jerseys which obscure numbers, then wins behind 5 TDs from Emmitt Smith's son
I found this story on USA TODAY High School Sports and wanted to share it with you: %link% For more high school stories, stats and videos, visit http://usatodayhss.com.