With use of only one arm, Ky. high schooler among world's best young archers

With use of only one arm, Ky. high schooler among world's best young archers

The junior at Bethlehem High School in Bardstown, Ky., is one of the top student archers in the world. And she mastered the art of firing arrows by the skin of her teeth.

It isn’t a trick when she uses her teeth to pull back the string on her bow. Shooting arrows this way is a necessity. A birth injury known as Erb-Duchenne palsy caused nerves in her right arm to be pulled away from her spine. As a result, she can’t use that arm.

“It would be impossible for me to pull” the string, Faith said.

But it’s not impossible to pursue her passion.

“What I love about archery is that you don’t have to be the tallest or strongest or the fastest runner,” Faith said. “You just have to have a strong mind and be willing to put a lot of work into it.”

She is one of a small number of archers who use a rectangular nylon mouth tab to pull back the bowstring — no small feat for the teen.

“I put the arrow on my string and hold it in my teeth (biting down on a nylon tab), then I take a deep breath,” Faith said. “I inhale and exhale a couple of times, then pull the string back and hold it at my aim point for two seconds and then I let go with my mouth.”

Competing last July against some of the best student archers in the world — who, it’s worth noting, all have two working arms and hands — Faith finished ninth at the National Archery in the Schools Program World Tournament held in Orlando.

Today she’s biting at the chance to compete in the World Championships again and score even higher. She plans to place in the top five when the competition comes to Louisville in the summer of 2018.

Her love for archery started at a young age. As a fourth grader at Camp Piomingo, a YMCA camp in Brandenburg, Ky., her counselor suggested Faith join her friends on the archery range.

“I told her she was crazy, I didn’t have enough hands,” she recalled. But Faith gave it a try anyway. Her counselor held the bow and Faith pulled back the string with her left hand and aimed.

She hit the bull’s-eye — and was hooked.

Back at school, Faith joined her fifth-grade archery team and got her first mouth tab.

“Archery was a huge confidence builder for me,” she said. Since then, it’s been a straight shot to the top. Faith routinely medals in any competition she enters.

David Carrico, one of Faith’s coaches at Bethlehem, has never coached an archer who uses a mouth tab and said he is impressed by Faith’s determination and endurance.

“She doesn’t use her back muscles to pull like the rest of the kids,” he said. “She uses the strength in her jaw and she aims differently, stands differently. Everything is different. But she never wants to be treated differently and she’s extremely determined and dedicated.”

And strong — the tension on her bowstring is about 20 pounds.

As a point of reference, try picking up a 20-pound bag of cat litter or a dumbbell and then imagine what it would feel like to pull that weight with just your jaw muscles and molars.

To make it into the top five next year at the World Championships, she’s focusing on improving herself both physically and mentally.

“Instead of tearing myself down, I am working hard on making myself learn from my mistakes,” Faith said. “I don’t get down on myself, I think about how I am going to fix this and reapply myself and do it better the next time.”

To stay on target, she practices with her school team twice a week and whenever she’s not in class or at work in her hometown of Shepherdsville, she’s practicing archery.

Faith plans to attend a college and compete on a collegiate team. Ultimately, she’s taking aim at making the 2024 or 2028 Paralympics archery team.

“I have always believed I can work hard enough to become the best in the world,” Faith said.

As she steps up to the line each competition, Faith knows there will always be people who stare at her unusual method of firing arrows. But as she finishes her round and steps back from the line, she hopes what they remember is a talented young woman who just happens to fire arrows with her teeth.

“I hope that watching me inspires people to feel comfortable to push their boundaries and do things they didn’t think they could do,” Faith said. “I am just like everyone else and I am proving you can do anything with determination.” 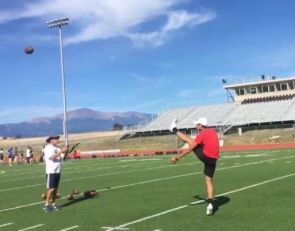 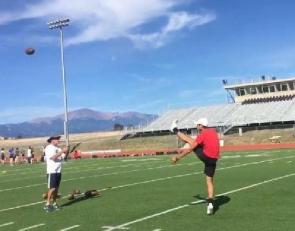 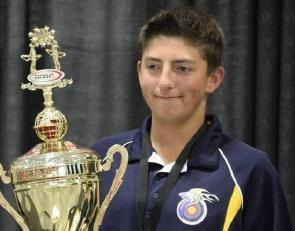 https://usatodayhss.com/2017/faith-oakley-one-arm-archery
With use of only one arm, Ky. high schooler among world's best young archers
I found this story on USA TODAY High School Sports and wanted to share it with you: %link% For more high school stories, stats and videos, visit http://usatodayhss.com.