The tension in the room was palpable Aug. 3 as Darfnell Gouin, his family, athletic director and football coach gathered for a teleconference with the Florida High School Athletic Association to appeal an eligibility ruling.

The question racing through the South Fort Myers High senior’s mind was would a two-year old rule that prohibits athletes who turn 19 years old before Sept. 1 end his high school athletic career?

If the answer was yes, Gouin believed it would torpedo his chances of becoming the first member of his family to attend college.

With so much riding on the verdict, the FHSAA ruled in his favor, granting Gouin a waiver to take the field at Wolfpack Stadium this fall. The safety and wide receiver felt he earned a new lease on life and isn’t going to waste his opportunity. 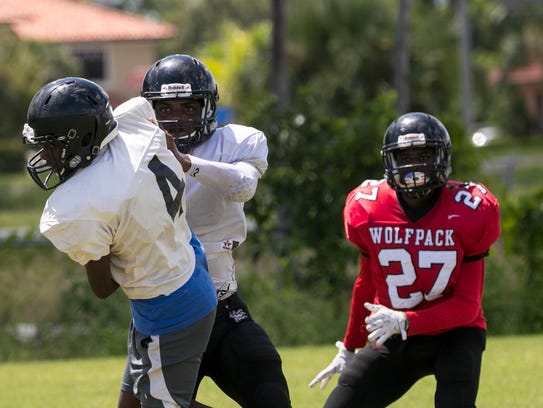 “It felt like all the weight got lifted off my shoulders,” Gouin said. “I’ve been working hard all my life. When I got hurt, and I was told I can’t play it felt like everything I had been doing was for nothing. Finally, when they said they were going to give me another chance it was like, ‘Wow. Everything I’ve been working for is paying off.’”

Gouin, who turned 19 in June, was forced to repeat a grade in elementary school because he missed too many days due to family issues. It wasn’t until his freshmen season in 2014 where he thought his age could be a factor.

When he asked then-coach Grant Redhead about it he was reassured it wouldn’t be an issue because the FHSAA’s rule stated a student-athlete would only be ineligible if they were older than 19 years, nine months by the cutoff date.

His fears were reignited the next year when the new rule was set to be put into place in 2016. Former coach Anthony Dixon, who replaced Redhead, made a plan for Gouin where he would set up an academic schedule and graduate early after his junior year, figuring he would make his mark on the field and grab the attention of college recruiters.

An ACL tear kept him from playing a single down in 2016.

Not only was he unable to help his team during a 9-2 season that reached a high when it knocked off Collier County powerhouse Naples, but there was no film for college coaches to evaluate for what he thought was his final season.

“The first thing I was thinking was how am I going to get to college?” said Gouin, who maintains a 3.26-grade point average. “Because everything I was doing was to get a free education and go on to the higher levels. I had always grown up in the lower class so there was no way I can pay for college at all. I was depending on football to get me there.”

After officially filing an appeal late last year, Gouin, a 6-foot-3, 200-pound versatile player, began to rehab and work out as if he was going to play at South this season. First-year Wolfpack coach Brian Conn prepared as if he’d have Gouin’s speed and strength at his disposal.

“With this rule change two years ago, you could be held back one time and be in jeopardy of not being able to participate your senior year, which is crazy to me,” Conn said. “We have elementary school educators who are looking out for somebody’s academic interests and, for whatever reason, they may just need to be retained and try the year over so they don’t get behind academically. And then, 10, 12 years down the road it comes back to be a huge negative.”

Conn didn’t know what to expect going into the appeal. He understood how not allowing him to play this season would affect the rest of Gouin’s life.

“In my mind, it was an obvious hardship the kid had,” Conn said. “It’s something that happened prior to this rule being changed two years ago. It was outside of his control. But you work with a kid for so long and you’re banking on having him. But in the back of your head, you’re saying, ‘What if we don’t? You have to have a backup plan.’ But in the teleconference with the FHSAA appeal board when we heard that verdict it was tears around the table. It was hard to hold it back.”

FHSAA spokesman Kyle Niblett was unable to release the total number of waivers given to 19-year-olds around the state because sectional appeals are still ongoing. He added there will be a “bunch” of appeals to the Board of Directors in September. Niblett did not have a number of students who appealed in 2016.

Gouin’s teammate Eddie Teague, a running back who turned 19 in March, had his appeal declined on grounds he didn’t have enough evidence to support his claim of a medical hardship. South is appealing the ruling.

Meanwhile, Gouin believes his potential is unlimited now that he has another chance to play. He already has scholarship offers from Ohio, Central Michigan, Florida Atlantic and Georgia Southern.

“I’m going to do what I’ve always been doing, working hard,” Gouin said. “There may always be people more talented than me. As long as I keep putting my work in it’s going to pay off somehow.”