MIAMI – Sebastian Ortiz lives on, with every shake of his father’s right hand.

Sebastian Ortiz lives on, with every dollar donated to the SebastianStrong Foundation.

Oscar and Rose Ortiz, Sebastian’s parents, lost their son to rhabdomyosarcoma cancer Dec. 29, 2016. He was only 16 and had battled the disease for 14 months. And two months after he passed, Oscar got a tattoo on his right wrist that reads: 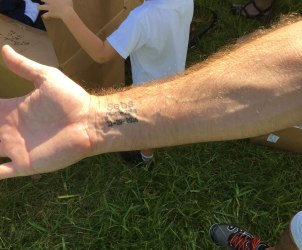 “I don’t need a reminder that I lost my son – that’s not why I got the tattoo,” Oscar Ortiz said.

People got involved Tuesday at Miami’s Tropical Park, where about 2,000 people – including 1,000 runners — turned out for the King of the Hill 5K. The money raised at this fourth-annual event –typically about $2,500 – has gone to two local cross-country programs.

But this year’s proceeds will go to Sebastian’s foundation, whose missions are to raise awareness, raise funds, give kids with cancer more and better treatment options and, ultimately, to help wipe out the disease that kills more children than any other affliction.

The Columbus cross-country team is honoring its former teammate in a couple of ways this year.

For starters, each runner is taking turns wearing Sebastian’s old jersey, No. 35. In addition, each kid is also wearing a “SO35” patch with Sebastian’s initials and number.

“I don’t know that he would’ve loved all this attention,” Rose Ortiz said of her son. “But I think he would agree that what we’re doing (with the foundation) is right.”

Columbus coach Eric Pino said the tribute in which each one of his athletes wears No. 35 on a rotating basis is just for this year, which would have been Sebastian’s senior season.

Deshay Fernandez wore 35 in Columbus’ first meet this year, winning the Under the Lights 5K. Christian Alexander wore 35 in the next meet and turned in a personal record at the Dade County Youth Fair.

Matthew Gonzalez, a senior runner for a Columbus program that has won four state titles — including three straight from 2008 to 2010 — said it was an honor last week when he ran with 35.

“The jersey is a metaphor for him being there with us,” said Gonzalez, who ran an 18.10, his fastest time of the year while wearing 35 at the Spanish River Invitational. “It brings us comfort.

“It’s him racing with us like the way he should have. One of us wearing that jersey each race keeps him alive with us, and when we graduate, that jersey will graduate with us.”

Sebastian was born on May 10 – which also happened to be his mother’s 29th birthday.

Rose said Sebastian “stole my spotlight” on that blessed day, but, in truth, she was only too happy to cede it to the second of her and Oscar’s three sons.

Sebastian was “an old soul,” his mother said, as comfortable talking to his younger cousins as he was to his father’s friends or to his grandparents.

He would connect with anyone and everyone.

Sebastian loved science fiction – the TV show “The Walking Dead” and the film “Interstellar” were among his favorites.

Music was another one of Sebastian’s interests. He had two guitars, acoustical and electric, the latter of which his uncle, Fernando Diaz, helped him pick out.

But among all of Sebastian’s passions, friends and family were always at the top of the list.

He grew up hearing about the comical stories told by his maternal grandfather, Rodolfo Diaz, who went to an all-boys Marist school in Cuba.

In that same Marist all-boys tradition, Oscar Ortiz and his three brothers — Javier, Cristian and Alex – all went to Columbus. And so did Sebastian’s older brother.

So when it came time for Sebastian to form his own brotherhood with the boys at Columbus, he was thrilled.

“He was an Explorer through and through,” Oscar said, referencing the Columbus nickname. “When he got sick (October, 2015), he said, ‘I don’t want to lose a year. I want to graduate with my friends.’ “

Sebastian never got the chance. But a couple of weeks before he passed, Columbus principal David Pugh and school president Brother Kevin Handibode came to the Ortiz home and presented Sebastian with his graduation ring.

The SebastianStrong Foundation was created because there are such limited options for kids with cancer. There are no early diagnostic tests for childhood cancer, either.

Since kids represent only one percent of new cancer cases annually, there are limited efforts from the pharmaceutical industry to find a cure. And since the government and the pharmaceutical companies provide so little in resources in this fight, supporting a foundation that is focused specifically on childhood cancer research is critical.

Sebastian, who was 6-1 and 140 pounds before he got sick, fought cancer with everything he had, never asking for pity and never losing hope. He endured two seven-hour surgeries and two other operations as well as 32 chemotherapy treatments and 23 radiation treatments.

He lost 30 pounds, and the side effects of chemotherapy caused him to suffer damage to his peripheral nerves, causing weakness, numbness and pain, usually in his hands and feet. The chemotherapy also lowered his blood count, which required several hospital visits for blood/platelet transfusions.

That miracle never happened, but Sebastian crammed as much joy as humanly possible into his 16 years, seven months and 19 days of life.

In that short amount of time, he managed to get his driver’s license – and a new car, a black “souped-up” Toyota Tacoma that he had for all of three weeks. He had a girlfriend. He had his brothers at Columbus and a family he adored.

He had his favorite vacation spot, the island of Saint John, which had been his family’s happy place, where all five Ortizes found joy.

Sebastian had wanted to go back there, one last time, with a huge amount of family and friends, but he ran out of time and heath.

Oscar Ortiz said his faith in God has been badly shaken now that he’s lost his son. But he still sees the divine at work. One example of that came during a Columbus football game earlier this month.

Columbus won by two points over Miami’s Booker T. Washington. And the only kid wearing No. 35 wristbands as a tribute to Sebastian was Diego Ramos, who made a diving catch on a two-point conversion that proved to be the difference in the game.

It was a touching moment, but Oscar wants more than tributes to his son. He wants people to get involved because he doesn’t want any other family to suffer the heartache he and his family have endured.

On Nov. 4, the SebastianStrong Foundation will host the first annual Childhood Cancer Awareness 5K in Miami Springs. There will be other events, too – Rose, who had been a teacher and a speech therapist, is now working full-time on the foundation.

“Sebs,” Oscar Ortiz writes on the SebastianStrong website, “we love you and miss you so much. We will spend the rest of our lives honoring you and working to find a cure for other children.”

If you would like to volunteer for a future event or donate funds, please email rose@sebastianstrong.org. 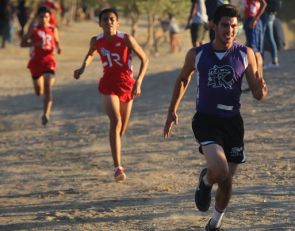 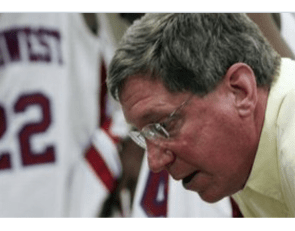 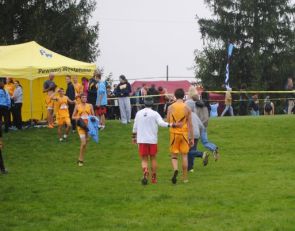 https://usatodayhss.com/2017/fla-school-and-community-honor-former-cross-country-runner-sebastian-ortiz-who-died-of-cancer
Fla. school and community honor former cross-country runner who died of cancer
I found this story on USA TODAY High School Sports and wanted to share it with you: %link% For more high school stories, stats and videos, visit http://usatodayhss.com.