March is Girls Sports Month, and as part of USA TODAY High School Sports’ third-annual Girls Sports Month celebration, we’re speaking with some of the most influential female athletes, coaches and celebrities in the sports world. U.S. Hockey national team goaltender Alex Rigsby joined us to speak about her journey between the pipes and how sports have shaped her world view.

ALEX RIGSBY: I’ve been playing sports for as long as I can remember. I was raised in California for the first five years of my life and my parents put me in soccer right away, and rollerblading and biking in the neighborhood. I got into hockey when I was five and never looked back from there. I always loved being outside and being active and playing and competing in any sport I could

USAT: Why is participation in sports so important for girls today?

GIRLS SPORTS MONTH: Check out complete coverage, including other athlete interviews and news

AR: I think participating in sports is so important, particularly for young girls, because it puts you in an atmosphere where you’re competing and learning from others. Everything I’ve learned from sports has applied to the rest of my life. As I’ve gained experience in the working world that becomes even more true. I think it’s tremendous for any girl to take part in sports

AR: Soccer was the first sport I played but as soon as I started playing hockey I was always on the ice. When I discovered goaltending that’s when I began begging my parents to play goalie. I grew up playing boys hockey and had two brothers. I wouldn’t put the pads on for my brothers when we would shoot in the basement, but my family was constantly traveling and playing AAA travel hockey.

USAT: What is the biggest life lesson you took away from your own competition?

AR: To this point it’s to always believe in yourself and never give up. I’ve had this dream of being in the Olympics since the women first won gold in 1998. You have to believe in your potential and continue to work hard day in and day out even when the chips don’t always fall in place. You have to have that determination. Along the way some people will doubt you, but there will be others who believe in you and yourself.

USAT: In what was has sports made you better at other aspects of your life?

AR: I think a lot of it is your work ethic. It helps you meet deadlines, you do everything you can to put in your best work possible. Being a part of a team atmosphere as I have growing up, you begin to work with others. Everything just comes back to working well with others, because you won’t accomplish much when you’re a one-girl team. You work hard for each other and that goes a long way.

USAT: Why is being a role model for younger girls so important to you?

AR: I grew up reading about a ton of different athletes in different sports. It was always so inspiring to hear the different stories and paths that took them to their success. Being able to be a role model to a younger generation is pretty humbling. I want to inspire young girls to be able to push through different boundaries and be successful in whatever they set their sights to.

USAT: What should girls do who don’t have access to sports they want to play?

AR: Hockey is a difficult one because you need ice to play on. I think it’s a matter of finding any way to kind of utilize your resources to get some equipment and find a way to be on teams that you can be a part of. If you’re passionate about something and stick to it, there’s always people who are willing to help you out and the coaches who go the extra mile for you. It’s really about pursuing it, and if it’s not applicable to play a certain sport, there’s plenty more to play for different schools and youth clubs.

USAT: What else do you think is important for girls to know about participation in sports?

AR: I think it’s important to not let people tell you what you can and can’t do. There were so many people who came up to me growing up telling me not to play boys hockey, or telling me I wouldn’t make a team. I always wanted to prove them wrong and tune them out by showing what I could do. I wanted to be like one of the guys and show I could play at their level regardless of whether I was a girl or a boy, and have an affect on my team regardless of my gender.

I also think girls should play as many sports as they can growing up, and not play one sport in particular. You don’t want to focus on your development until you need to; I was a multi-sport athlete through my sophomore year of high school. I obviously had hockey in the back of my mind as my main focus, and had my friends outside with my traveling teams, but the other sports I took part in was through the school where I was a part of, and I got to take part in that as well.

The most rewarding thing I’ve been able to do in sports is to be able to compete day in and day out with this team. Taking step back to think about how many people would love to be in the position I’m in, I’m really fortunate to be surrounded by so many wonderful women. It’s really inspiring every day to see the different levels that people bring, and then to get together at camp and get ready to compete in the world championships. We’ve had some exciting games in recent years, and now we’re really excited to get together in a few weeks and compete for another championship. 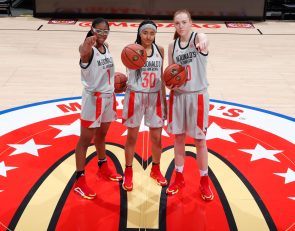 https://usatodayhss.com/2017/girls-sports-month-us-hockey-goalie-alex-rigsby-on-determination-and-playing-with-the-boys
Girls Sports Month: USA Hockey goalie Alex Rigsby on determination and playing with the boys
I found this story on USA TODAY High School Sports and wanted to share it with you: %link% For more high school stories, stats and videos, visit http://usatodayhss.com.