Hollingsworth, a 6-foot-2 guard who has signed with Western Kentucky University, had been considered the Mr. Basketball favorite since leading Paul Dunbar to the state title last year and earning Sweet 16 MVP honors.

Duvall, a 5-10 guard who has signed with the University of Louisville, was considered by many as a co-favorite for Miss Basketball honors with Butler’s Jaelynn Penn, who led the Bearettes to the state title as a junior and took Sweet 16 MVP honors along the way. Penn has signed with Indiana University.

Hollingsworth and Duvall will wear the No. 1 jerseys when the Kentucky’s All-Stars face Indiana in the states’ annual summer series. Games are scheduled June 10 in Indianapolis and June 11 at Central Hardin High School.

►Boys Sweet 16 by the numbers

►Ballard turned season around in Indianapolis

“Pure joy,” Duvall said of winning the award. “It’s a great feeling. I feel like the team and the community really all deserve it.”

Duvall missed all but seven games of her junior season after having a grape-sized tumor removed near her left knee in November of 2015. Two months ago doctors found they didn’t remove all of the tumor, and Duvall had another surgery last week.

“It wasn’t as big,” said Duvall, who was on crutches as she accepted her award Tuesday. “They said in four weeks I should be back running if all goes well. … They think they got it all.”

Duvall, who started playing for Bullitt East’s varsity team as a seventh-grader, finished her career with 2,957 points, tying with Leslie County’s Hillary Moore for 25th place in state history.

She is Bullitt East’s second Miss Basketball winner, joining Becky McKinley (1992), and the first Sixth Region player to win the award since Iroquois’ A’dia Mathies in 2009.

“It’s a great honor,” said Hollingsworth, who became Lexington’s first Mr. Basketball winner since Henry Clay’s Steve Miller in 1984. “I didn’t really think about (Mr. Basketball) my first two years at Dunbar. I actually started to know about it when I was junior. … Coming into high school I wasn’t known at all until we made it to state and we went on a run.”

“Western is happy they got him, but wait and see,” Chalk said. “I just hope they don’t play Kentucky or somebody because watch what he’ll do. That’s when he’s at his best when he has a chip on his shoulder. Look out. … You need fuel, and he’ll use it for the positive. He’s going to have a great career (at WKU).” 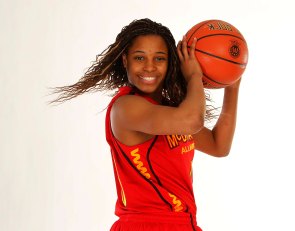 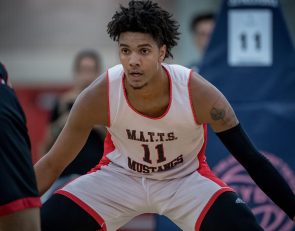 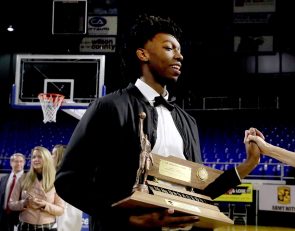