Triumph transformed to tragedy in almost record time for one Kansas school when the mother, sister, and uncle of two brothers on the team were killed in a head-on collision on the way back from a state championship victory.

As reported by the Associated Press and Topeka Capital-Journal, Sabetha football players Tanner and Carson Ukele were told while traveling home following the state championship victory that their mother Carmen, 11-year-old sister Marlee Ukele and 62-year-old uncle Stephen Ukele were killed in a highway accident.

The incident allegedly occurred when a car going the opposite way on a two-lane highway attempted to pass a car in front of it, striking the Ukele’s vehicle. The brothers’ father was also in the vehicle when it was struck, but has been hospitalized and is expected to recover.

Tanner Ukele was the starting left guard and Carson Ukele the starting right tackle on a Sabetha team that earned its first state title in 20 years. The victory wasn’t a boring blowout, either, with Sabetha gritting out a 7-6 win sealed with an interception at the goal line with seconds remaining.

Per the Associated Press, Sabetha coach Garrett Michael said the team was rallying around the brothers and planned to support them however needed and possible.

“(The Ukele’s have) 50 brothers who are going to be surrounding them in our school.” 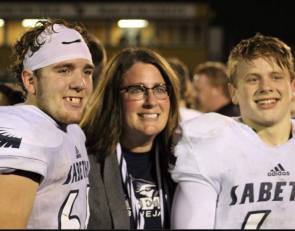 https://usatodayhss.com/2017/hours-after-winning-state-title-kansas-team-deals-with-tragic-death-of-ukele-brothers-family-members-on-ride-back-home
Hours after winning state title, Kansas team deals with tragic death of Ukele brothers' family members on ride back home
I found this story on USA TODAY High School Sports and wanted to share it with you: %link% For more high school stories, stats and videos, visit http://usatodayhss.com.