It’s overly simplistic to say that one player won his team a game, but in the case of Jalen “Boobie” Curry, it may not be much of a stretch.

On Friday, Curry set a Texas state record with 26 individual receptions in his St. Pius X squad’s 53-42 victory against Concordia Lutheran. The four-star junior Florida State commit stands 6-foot-3 and 195 pounds and has phenomenal athleticism. He is ranked 20th among Class of 2019 recruits from the state of Texas, and comes in anywhere between 11 and 21 in the list of top wide receivers.

St. Pius competes in the Texas Association of Private and Parochial Schools (TAPPS), which is an association comprised predominantly of religious schools. Most critically, TAPPS schools never compete against University Interscholastic League (UIL) counterparts, which leads to allegations of statistical doping on the part of TAPPS superstars.

All of that is to say that when a TAPPS school star breaks a record, which Curry certainly did, there are sometimes side-eye glances about the level of competition against which the gaudy stats were achieved.

Or, perhaps Curry really is that good. After all, 26 receptions is almost a season total for a number of starting receivers. To rack up that many in a single game is stunning, even if Curry just wanted to keep the attention on the team and its goals.

“It’s amazing to come back from a loss (to Fort Worth All Saints last week) and be able to capture this ‘W,'” Curry told the Chronicle. “Our confidence is building back up.”

What a night for Boobie 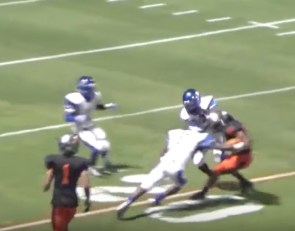