MILWAUKEE — A break to himself during a drive earlier this month led to strong emotions for Chris Herro the day before his oldest kid signed to play for the most successful college basketball program in history.

“Jesus Christ, my son is going to Kentucky,” he said to himself.

Two weeks prior, Tyler Herro, the four-star class of 2018 shooting guard from Milwaukee previously verbally committed to Wisconsin, didn’t have the option to sign with the Wildcats.

He didn’t have an offer. Not yet.

That changed on the last day of October when, as Herro practiced his jump shot, a door to the Whitnall High basketball gym opened.

In walked Kentucky coach John Calipari and assistant Kenny Payne. Herro had no idea they were coming and had never met Calipari before, but he kept shooting.

“I was kind of nervous at first,” he said. “That’s Coach Cal. That’s a Hall of Fame coach.”

Calipari was impressed with Herro’s 3-point range and the 6-foot-4 standout’s developing ability to handle point guard duties if necessary. After the workout, Calipari and Payne drove to the Herro residence to deliver good news.

“My husband said, ‘Be yourself, act like yourself and you’ll be fine,'” she later said.

It had been a busy 24 hours for Calipari, but he was intent on seeing Herro in person. Kentucky defeated Morehead State in an exhibition the night before, and Calipari woke up Tuesday morning in Lexington, rode an hour in an SUV to speak to the Greater Louisville UK Alumni Club and then had a choice to make.

He could board a plane with Payne to Wisconsin to meet Herro or travel to South Carolina with assistant Joel Justus to see Zion Williamson, the five-star small forward and No. 2 overall senior in the country.

Calipari chose Milwaukee. He had to see those 3-pointers in person, and (once Herro’s talent was assessed), Calipari preferred to make the scholarship offer in front of the entire family.

Chris, Jen and Tyler’s two younger brothers, Austin and Miles, were there when Calipari invited Herro to play for him at Kentucky.

Shot after shot after shot. Since he was 6 years old, shooting a basketball was seemingly the only thing Herro wanted to do. Jen Herro remembers taking Tyler to the gym when she was pregnant with his younger brothers. He shot at the basket while she exercised. Soon, instead of asking him if he wanted to go shoot, Jen was asking if he would, please, take a break.

Chris coached Tyler through grade school and during his initial experiences with AAU.

“I put my heart and soul into Ty since the second grade,” Chris said. “It’s been a crazy, crazy ride.

“It makes you think of the ultimate end game. When you look back at the all the time and effort, he’s put a ton of the work in. I put in some effort, but not as much as him. When you can see your son achieve a dream of going to one of the top schools in the country it is strictly amazing.”

By the time he was a high school sophomore, it was clear Herro could play for a number of top programs. And in September 2016, before his junior season began, Herro ended his recruitment process.

He would play for the in-state Badgers, he said. He had the potential path of Sam Dekker — a Wisconsin boy who stayed home, lived out iconic moments in Madison and moved on to the NBA.

But more than a year later, the plan changed. Herro decommitted from Wisconsin on Oct. 17 because, he revealed later, he wanted to play for “a blue blood” program.

“My drive to become the best on all levels has been the fuel that drove this decision,” he said in a statement the day he reopened his recruitment.

The backlash from Wisconsin fans who felt betrayed was swift and, especially on social media, severe.

“I kind of got on social media a little bit and that was one of the worst things I did,” Jen Herro said. “It doesn’t matter what I think, what my husband thinks, what the state thinks. He had to do what was going to make him happy. As long as he’s happy.”

Whitnall High basketball coach Travis Reisop helped his best player navigate the days after the decision to back away from Wisconsin. Included in the advice: Don’t tweet back to critics.

“He’s really got to stay grounded because you know Wisconsin is a very loyal sports state,” Reisop said. “When they feel someone does them wrong, they’re going to let them know about it.”

Tyler got what he wanted during the two weeks following the decommitment: Kentucky and Kansas, the two-winningest college basketball programs in history, expressed interest.

“He wants to be somewhere he can be challenged and he’s not afraid of anything,” Chris said. “That was important along the way, because some kids can’t handle it and some kids can. We had to make sure he understood what he was walking into. As a dad, that’s what we talked about it.”

Calipari offered Oct. 31, and Herro took his official visit to Kentucky the next weekend. Once on campus, Herro said he quickly felt UK was the place to be. He talked to the coaches and family on Saturday and committed to Payne during breakfast on Sunday.

“Let’s do it. Let’s bring you here now,” Herro said Payne told him.

Herro told Calipari later that day after Kentucky’s shootaround before the Vermont victory. They shook hands and then hugged.

“He was super happy,” Herro said.

And so, too, was Tyler Herro. He signed his letter of intent, locking in his decision, at a ceremony a week later in the same gym where Calipari and Herro met.

In a span of 28 days, Herro went from a pledge to Wisconsin to a future with Kentucky.

Family, friends and coaches smiled and supported Herro. Some on the fringe, though, revealed the lingering damage done by a Wisconsin kid leaving for the Bluegrass.

“He didn’t pick Wisconsin?” one student asked another in the parking lot outside the school.

“Nope. He’s going to sit (the) bench at Kentucky,” the other replied.

That’s the path Herro wanted to take, where fulfilling his dreams apparently crushed the hopes of others.

“People can call me whatever they want, call me a snake, say I turned my back on the home state, but they don’t see what I’m putting in,” he said. “I’m going to the gym three times a day, so when I’m out there I don’t care what people say. Basketball is pretty much what I breathe and eat.” 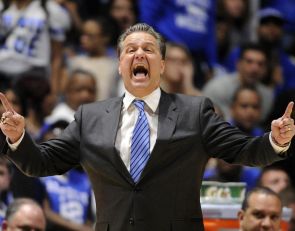 https://usatodayhss.com/2017/how-tyler-herro-went-from-a-wisconsin-commit-to-kentucky-bound-in-28-days
How Tyler Herro went from a Wisconsin commit to Kentucky-bound in 28 days
I found this story on USA TODAY High School Sports and wanted to share it with you: %link% For more high school stories, stats and videos, visit http://usatodayhss.com.