The Spackenkill boys basketball team after beating Rhinebeck in the Section 9 Class B championship game at SUNY Orange in Middletown.

MIDDLETOWN – Intangibles go but so far. Terms like “intensity” and “grit” have become bromides in sports parlance, but seldom are those really the determining factors in a game.

That is, until a team has been shellacked in the opening minutes of a championship and the idea of a sparkling season ending up fruitless becomes a real possibility.

The Spackenkill boys basketball team avoided that on Saturday, rallying in the second quarter and then taking control to beat Rhinebeck High School, 65-56, in the Section 9 Class B final at SUNY Orange.

“There’s no better feeling than holding that plaque,” forward Kyiev Bennermon said. “From the end of tryouts, when I saw the kind of talent we had on this team, I knew we had a chance to win this.” 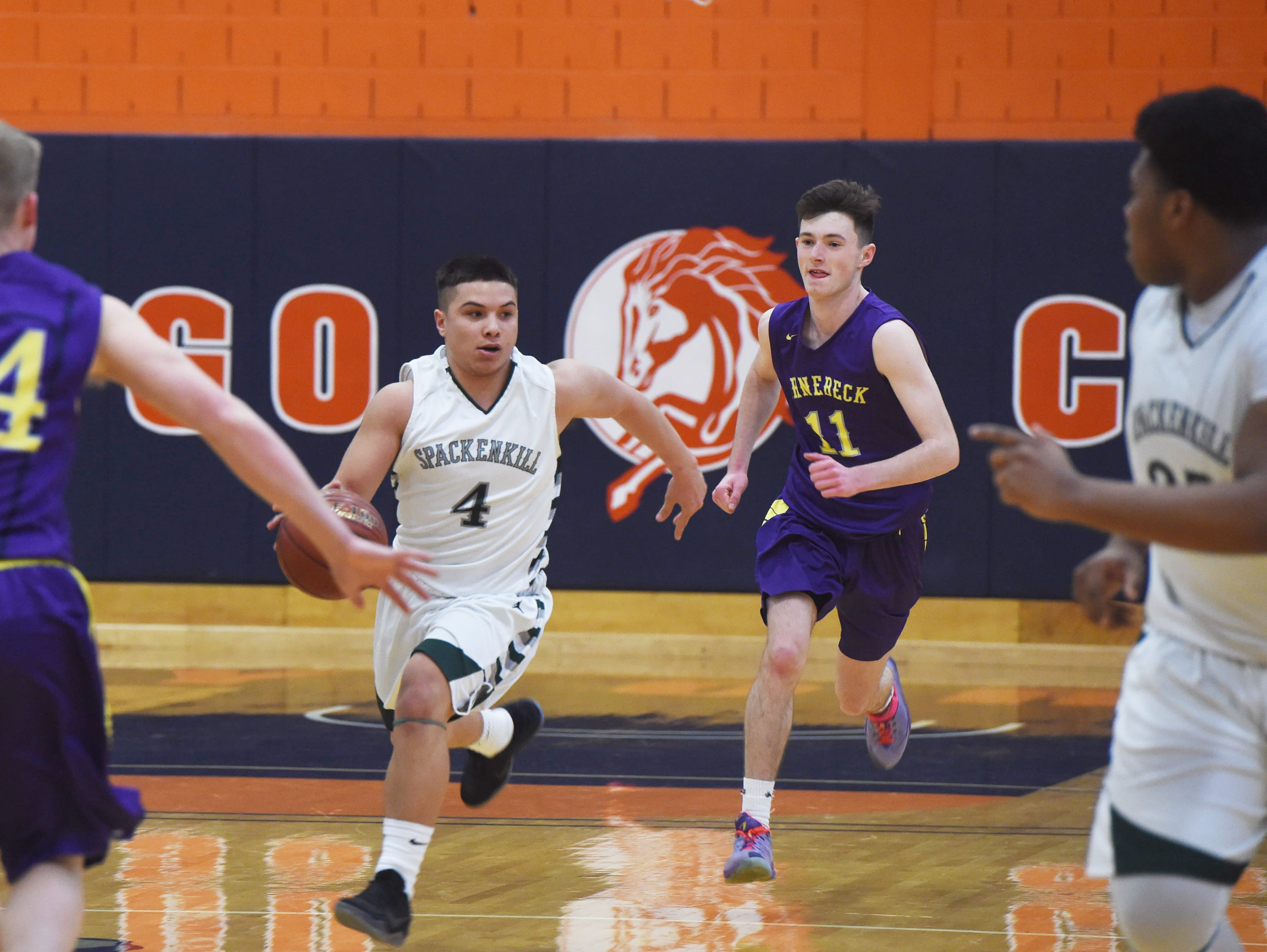 Spackenkill’s Camron Abalos, center, takes the ball down the court during Saturday’s Section 9 championship game against Rhinebeck at SUNY Orange in Middletown.

Camron Abalos scored for 11 of his 25 points in the third quarter, and Hayden Peek dropped 11 of his 21 in that pivotal period for the top-seeded Spartans. Those names pop immediately in the box score.

But the one most mentioned by teammates — including those two — was John Timm. The senior scored two points, but…

“He lit a fire under us,” Spackenkill coach Tom Bell said. “John brought the energy defensively and that’s what led to us turning the game around.”

Spackenkill, which last won the title in 2014, will face Section 1 champion Pleasantville in a regional semifinal on Tuesday, 5:45 p.m. at Yorktown High School.

Spackenkill’s Kyiev Bennermon, center, goes for a layup during Saturday’s Section 9 championship game against Rhinebeck at SUNY Orange in Middletown.

But Rhinebeck’s performance at the outset raised doubts about Spackenkill’s prospects. The third-seeded Hawks raced out to a 9-0 lead three minutes in, and Lex Kronbichler’s three put them up, 19-7, three minutes into the second quarter.

That’s when Timm began putting his imprint on the game. The forward shifted to guarding Jack Spencer, Rhinebeck’s hot hand, and held him to five points in the second.

“Last year I had to sit out with a concussion and I watched our team lose to Marlboro in the final,” Timm said. “So I wanted to do everything I could… I don’t contribute much on offense, so I try to have an impact on the other end.”

Spencer did finish with 25, but Timm certainly made him work for it and his constant pressure and aggressiveness helped ignite that in his teammates.

“Coach was preaching defense all along, but when you see somebody giving maximum effort and making things happen, that adds something to it,” said Abalos, a point guard. “After that, we all started getting more aggressive and trying to make plays.”

The rotations and switches on defense were more crisp, and the back court pressure led to turnovers. Ezekiel De La Cruz, with his length and athleticism, also helped contain Rhinebeck. And the offense picked up. The Spartans surged late in the second quarter and Bennermon’s layup had them entering intermission down just 26-24. 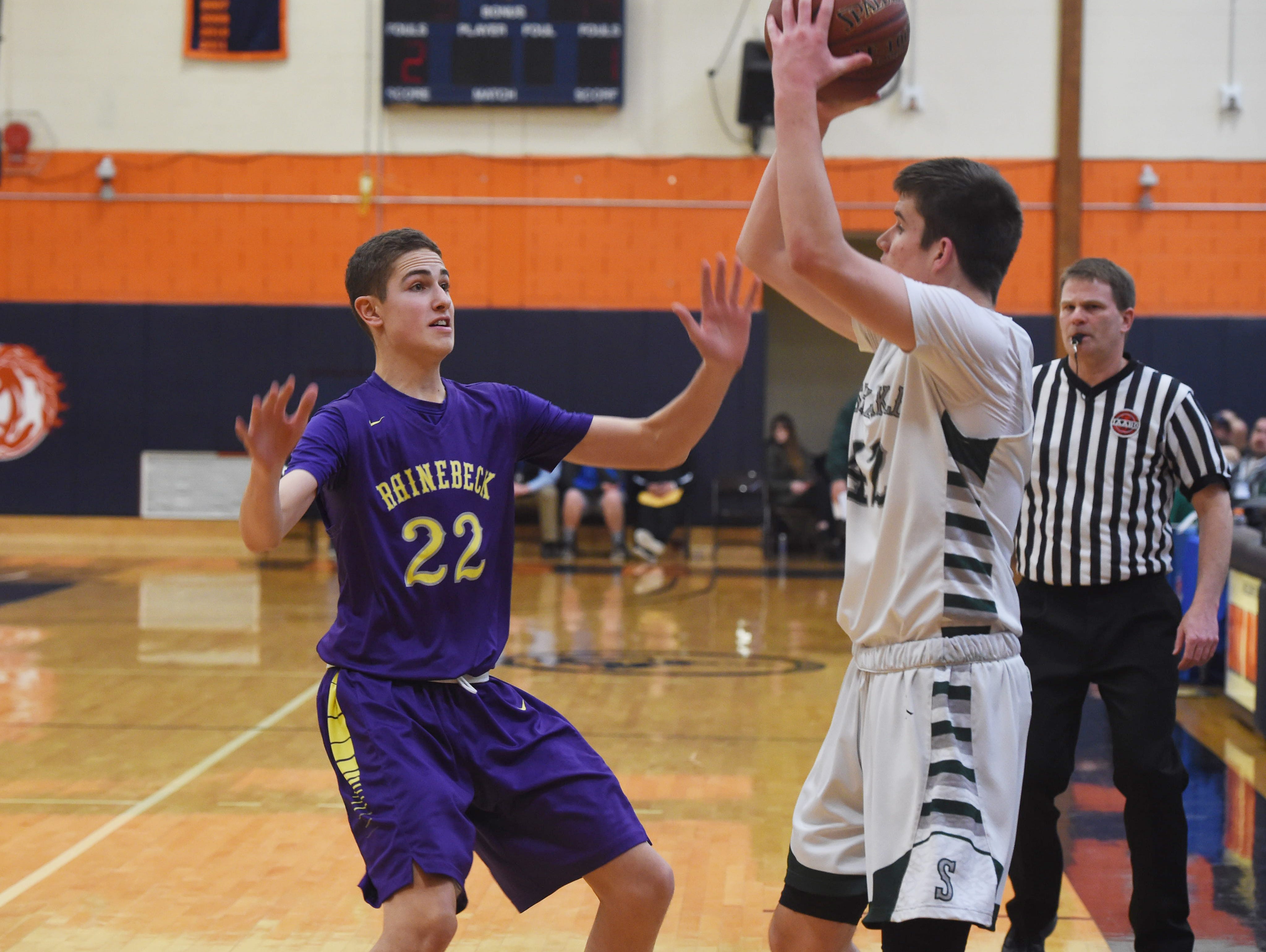 Spackenkill outscored Rhinebeck, 24-14, in the third. Peek’s three from the left wing — off a drive and kick from Abalos — gave them a 41-34 lead with 2:53 left in the quarter. Bennermon had 11 points, nine rebounds and two blocks for the Spartans (20-2).

“We had trouble scoring at first,” Peek said, “but we kept attacking and we knew our shots would eventually fall.”

The Hawks did rally late, and Rob Veith (nine points) converted a three-point play that cut the lead to 58-54 with 1:25 remaining. But Spackenkill sank free throws to salt the game away. Rhinebeck went 19-3, but the Spartans were responsible for each of those losses.

“They’re a great team and it was tough,” Bennermon said, “It’s never easy to beat a team three times.”

That’s another of those sports clichés. Another one proven true.