For high school athletes who grow up in southern California, the ocean is always calling. That especially goes for the aquatic-inclined, such as members of a water polo team.

However, a fun morning of surfing amongst friends and Mater Dei (Santa Ana, Calif.) water polo teammates recently almost turned tragic. That is, until the quick thinking of one Mater Dei freshman in saving another.

As the Orange County Register reports, Mater Dei freshman Riley Miller played for the school’s frosh-soph water polo team and plans to swim the spring. The 15-year-old also likes to surf, and early Saturday morning Nov. 4, he, fellow Mater Dei teammate James Stanton and four other teammates headed over to Huntington Beach to catch some waves.

As Miller told the Register, the boys hit the surf just south of the Huntington Beach pier around 7 a.m. They surfed for a couple hours before Miller dove off his board. Having misjudged the water’s depth, Miller slammed the top of his head on the ocean floor. The impact, the Register reports, left him temporarily paralyzed and floating on his back with the aid of his wet suit in just a few feet of water.

Miller called for Stanton and another friend, Erik Franck, but though they didn’t hear him. As he told the Register, he felt that the next set of rolling waves would flip him face down in the ocean, which may cause him to drown.

“I was just thinking RIP, like I’m gone,” Miller told the Register. “But then James saw me.

Stanton, a sophomore and Huntington Beach resident, saw Miller floating and swam over to him. He then used a tactic he’d learned as a member of Orange County Junior Guards. The 16-year-old placed his arms under Miller’s arm pits, held the sides of Miller’s head and stabilized the neck as he pulled his friend from the ocean to the sand. It was the “full nelson,” also known as a tried and true tactic when playfully wrestling a sibling.

“I just like being able to help people,” Stanton told the Register.

He also said he wants to be a lifeguard like his brother, Skyler, and his father, Brian, a former lifeguard.

Soon after being brought to shore, Miller regained movement and was transported to the hospital.

“Scariest thing that has ever happened to me being a mom,” said Miller’s mother, Nadia, who drove to the hospital from her youngest son’s basketball game in Fullerton.

Her son, meanwhile, has returned to school. And he has even returned to surfing with his group of friends, thanks to the quick thinking of one James Stanton. 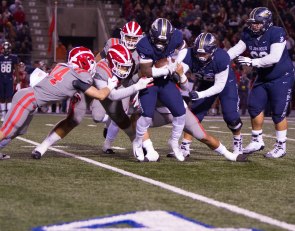 A single ticket for Mater Dei-St. John Bosco face off was posted on Craigslist ... for $200 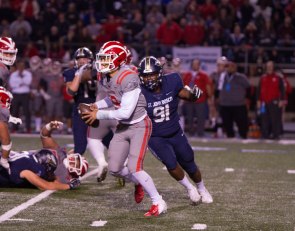 What We Learned: No. 1 Mater Dei dominates second half in cross-country win over St. John's College (D.C.)

“I was just thinking RIP, like I’m gone. But then James saw me.”