Mich. football players benched for planning to kneel during anthem: 'This feels like oppression'

Mich. football players benched for planning to kneel during anthem: 'This feels like oppression'

Four Lansing Catholic football players have been benched for Friday night’s home football game against Ionia after saying they planned to kneel during the national anthem.

Michael Lynn III, the team’s starting quarterback and one of three captains, was informed Thursday at practice by Cougars coach Jim Ahern that he would not play Friday because of his plans to take a knee.

“I get they are a private school and they can do what they want,” Lynn III said. “They are right, they can. But that doesn’t make it humane and that does not make it OK that they can do that because that still is my right to peaceful protest. Not only am I peaceful protesting, but I’m protesting as a primary source. I am a young black man in America. I’ve had to deal with certain things that other people will never have to deal with.

Three other players who were planning to kneel – Matthew Abdullah, Kabbash Richards and Roje Williams – also were told they would be benched, according to Lynn III.

Ahern declined to comment to the State Journal. He referred all questions on the matter to Lansing Catholic President Tom Maloney, who declined any comment beyond a letter sent to parents earlier Thursday.

In that letter the school said any student athletes who decide to take a knee during the national anthem at Lansing Catholic will be subject to discipline from the school, although the discipline was not specified.

“After much prayer and reflection; in consultation with our Board of Trustees, with the Superintendent of the Diocese, with administrators at other Catholic schools, and with law enforcement, we will continue to hold our student-athletes to the expectation that they stand for our National Anthem,” a letter sent by Maloney said.

“Any student-athlete who chooses not to stand will receive consequences. As always, this will be handled with Christian Charity, with the goal of growth in virtue.”

Lansing Catholic acknowledged in the letter being aware of the role peaceful protests play in society, but reiterated its stance that school athletic events — home or away — are not the appropriate venue for protests.

“As you know, your children’s safety is our first priority, and one that we take very seriously,” the letter added. “We know you place your students in our care, and at times we must acknowledge that this sort of display could create an unsafe situation for any student involved.”

Lynn III first approached the school with his desire to peacefully protest last week. The predominantly white school initially was supportive of his stance but asked him not to kneel last week at Fowlerville.

Following a team meeting Monday, which included Ahern and Athletic Director Brian Wolcott, an agreement was reached about some players taking a knee this Friday, Lynn III said.

“I want the world to know about this,” Michael Lynn Jr. – Lynn’s father – said. “I want everybody to know the injustice that’s going on here. I think that’s what Michael’s intent is. This was not our idea. This was not something that me, he and his mother came up with or provoked him to do. Michael has got this in his heart.

“After dealing with everything he’s dealt with at Lansing Catholic and in his life and everything he’s worried about for himself and other brothers of color, he said I have to do something and this is what I want to do,” Lynn Jr. added of his son. ” And he said I want to use my platform as a public figure in this city to get the word out and to make that stand. He’s been steadfast in it even knowing the discipline actions.” 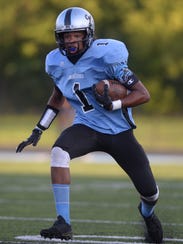 Marcie Abdullah, whose son Matthew is also senior on the football team, was disappointed the school was taking away students’ voices after initially agreeing to let them take a knee if they chose.

“If they said this is not OK, let’s come up with a different way of doing things, that would not have surprised me at all,” Abdullah said. “The fact that they went through an hour meeting letting the kids think they had a voice and a say and that they worked things out amongst themselves and then that was totally undone.”

Protests at professional athletic events during the national anthem have grown in recent weeks following comments from President Donald Trump. They even hit the high school level last week with the Jackson football team deciding to kneel prior to the anthem and then standing for the playing of the song before its CAAC Blue contest against Grand Ledge.

https://usatodayhss.com/2017/mich-football-players-benched-for-planning-to-kneel-during-anthem-this-feels-like-oppression
Mich. football players benched for planning to kneel during anthem: 'This feels like oppression'
I found this story on USA TODAY High School Sports and wanted to share it with you: %link% For more high school stories, stats and videos, visit http://usatodayhss.com.