The Phoenix Moon Valley Rockets returned to the football field on Friday, their first game since the death of junior Carlos Sanchez.

Although the Rockets lost to visiting Peoria 26-0, the Moon Valley community was shining bright as they remembered Sanchez.

A 16-year-old starting linebacker who also played running back, Sanchez died last weekend after collapsing on the field during a game last Friday against Glendale Cactus. The teams completed that game as Cactus defeated Moon Valley.

Hospital officials confirmed on Sunday evening that Carlos had passed away.

After the moment of silence, each Moon Valley football senior was recognized prior to the final home game of the regular season. Each senior placed a single white rose at the 33-yard line.

As Peoria lined up for its first play from offense, a player took a knee and a tackle was ceremoniously credited to Sanchez. Moon Valley quarterback Isaiah Southwick also wore special cleats in his teammate’s honor.

The Glendale Union School District restricted media access to a roped-off area beyond the west end zone and did not permit contact with any fans or players.

However, the district did make available Shawn Kaowili, president of the Moon Valley football booster club, who said he was moved by the support shown by the community.

Although media was neither allowed in the parking lot nor on the field before, during or after the game, the unity shown by the Moon Valley crowd — in the form of posters, banners, etc. — was evident. 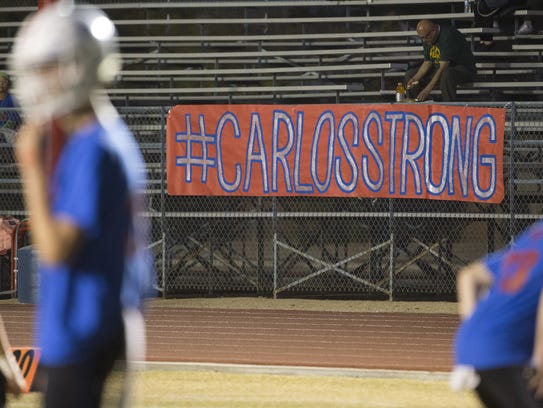 Students start to fill the stands behind a banner in memory of Carlos Sanchez at Moon Valley High School in Phoenix, Ariz. on October 27, 2017. (Photo: Patrick Breen/azcentral sports)

“The mood today was actually very good, everybody was glad to be here,” Kaowili said. “People are here and donating and supporting the family. It seems like everybody on both sides of the stands have been very supportive.”

According to Kaowili, the players had taken a vote on whether or not to play the game after the Arizona Interscholastic Association said they would not impose a fine should Moon Valley choose to forfeit.

However, the Rockets elected to play and honor the memory of their teammate.

“I think they were prepared,” Kaowili said. “(Head coach Seth Millican) said by allowing themselves to play tonight, they’ve already won. Whether you win or lose, taking control and saying they were going to go out there and play for Carlos, they’re already winners.”

Added Millican: “As a football coach, it’s easy to remember the football side. I remember the absolute best scout player who ever lived. Always a clean 100 percent. …

“Off the field, he always had a smile on his face. He was the kid walking down the sideline trying to keep people’s spirits up. When things went bad, he was a source of strength for this team.”