Sitting inside the same football stadium where he once was a star quarterback, Darin Petro beamed with pride as his son, Patrick, an 18-year-old Woodbridge (N.J.) senior with Down syndrome who serves as the team manager, was crowned homecoming king on Friday night.

The coronation was a testament to Patrick’s immense popularity and reflects an exemplary attitude of inclusion at Woodbridge, whose principal, Glenn Lottmann, moved to the township’s Port Reading section before becoming an administrator to position his own three young children to one day attend the high school.

“Every principal says how much they love their school, but I can’t wait for my kids to go there,” said Lottmann, who called Patrick being voted homecoming king “my proudest moment as a principal, and I’ve had many.”

With the public address announcer’s declaration of Patrick as the Class of 2018’s homecoming king, the overflow crowd on the home bleachers at Nicholas A. Priscoe Stadium erupted with a thunderous standing ovation.

Patrick’s mother, Dawn, alongside her husband on field level adjacent to the tunnel from where the Barrons enter, was overwhelmed with joy. She jumped up and down before giving Darin a hug.

Above the proud parents, a throng of their son’s supporters held a 12-foot-wide banner bearing the words “We Love You Patrick!” as they chanted the new homecoming king’s name. After receiving his crown and sash at midfield, Patrick posed for a group photo with the homecoming court, saying between snapshots, “I have to get back on the field for the second half.”

The school community’s tribute to Patrick epitomizes the spirit of National Down Syndrome Awareness Month, held each October as a celebration and to heighten awareness.

According to the National Down Syndrome Society, more than 6,000 babies — or one in every 700 — is born annually in the United States with Down syndrome, the most commonly occurring chromosomal condition in which an individual has a full or partial extra copy of chromosome 21.

The number of babies born with Down syndrome has decreased 30 percent, according to the American Journal of Medical Genetics, a decline that the medical journal Prenatal Diagnosis attributes to nearly 70 percent of pregnancies being terminated following a prenatal diagnosis of Down syndrome.

Making it abundantly clear he did not want to enter a pro-life or pro-choice political or religious debate, Darin said he has contemplated those statistics and wonders if prospective parents of children with Down syndrome “know the joy Patrick has brought to us.”

“We’ve had difficulties, but we’ve learned a lot of things,” Darin said. “The joys outweigh the down times. I think some parents never get to experience that.”

On Friday night, before Woodbridge’s annual homecoming game against township rival John F. Kennedy, Patrick, as has been his role for the past two years, led the Barrons onto the field and joined the team captains at midfield for the opening coin toss.

“He is the heart and soul of our team,” Woodbridge defensive coordinator Joe Liquori said. “Patrick brings more enthusiasm than almost every other player. He’s a joy to be around. His love for the game puts things in perspective for you. You can be any size, you can have any background. If you have that love and passion, that’s what the game is all about.” 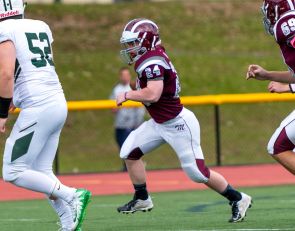 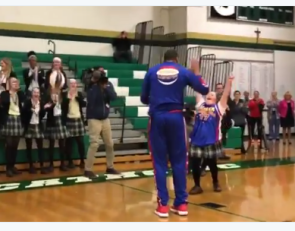 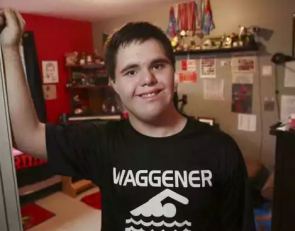 https://usatodayhss.com/2017/n-j-school-crowns-popular-student-with-down-syndrome-homecoming-king-patrick-petro
N.J. school crowns popular student with Down syndrome homecoming king
I found this story on USA TODAY High School Sports and wanted to share it with you: %link% For more high school stories, stats and videos, visit http://usatodayhss.com.